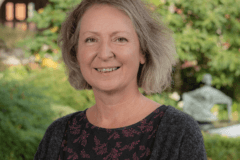 Olwen Purdue is Professor of Modern Social History at Queen’s University, Belfast where she works on the social history of nineteenth and early twentieth-century Ireland with a particular focus on social class, urban poverty and welfare. Olwen directs the Centre for Public History at Queen’s and is particularly interested in the role of public history in divided societies.

Olwen’s publications include The Big House in the North of Ireland: Land, Power and Social Elites, 1870-1960 (2009); The Irish Lord Lieutenancy 1541-1922 (2012); Urban Spaces in Nineteenth-Century Ireland (2018); and The First Great Charity of this Town: Belfast Charitable Society and its Role in the Developing City (2022). Her new monograph, Workhouse Child: Poverty, Child Welfare and the Poor Law in industrial Belfast, 1880-1918, is due out with Liverpool University Press in 2023, and an edited collection on Difficult Public Histories in Ireland is due out with Routledge in 2024. Olwen was formerly international editor for The Public Historian and is currently series editor for Liverpool University Press’ Nineteenth-Century Ireland series.

Olwen was elected to the RHS Council in September 2022. She is also a member of the Board of Directors of the Irish Museums Association, a member of the advisory board for the Ulster Museum, and a Governor of the Linen Hall Library.