Founded in 1868, the Royal Historical Society (RHS) is a successful learned society, membership organisation and charity with a 150 year history. Today, the RHS is the UK’s foremost society working for historians and history.

In 2022 over 4500 historians belong and contribute to the Society — as fellows and members active in the UK and worldwide. This makes the RHS the UK’s largest membership organisation for historians of all kinds, and from all walks of life — held in high regard by historians internationally, and a partner to many similar organisations overseas. These national and international connections are led by the historians who make up the RHS Council (Trustees), and the small central team based at University College London, which is the home of the Society.

In recent years, the Society has also has extended its work to a sixth important area: advocacy and intervention in policy debates about the study of history. Under the Society’s current President, Professor Emma Griffin, the RHS is also attracting and engaging with a wider membership from sectors well beyond beyond higher education.

Researchers and those working in history are welcome to join the RHS as Fellows and Members, with deadlines for applications in January, April, June, September and October of each year.

How the Royal Historical Society works 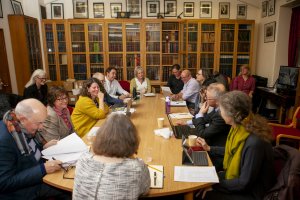 The Society is predominantly a voluntary organisation with a revolving Council whose members offer dedicated service ensuring the smooth-running and development of the organisation. Council comprises a body of twenty-three Fellows each of whom serves a four-year term working on our various committees and working parties. Every year the Fellowship elects three new members of Council using a preferential voting system.

Council in turn elects our Officers — including the President, Secretary and Treasurer — who each serve a four-year term. In addition, we have two Literary Directors who sit on the editorial boards of RHS publications and four Vice Presidents (all members of Council) who act as Chairs of our various committees and undertake other activities for the Society. The President, Officers and Councillors work closely with the RHS central office team, based at UCL, who are responsible for the running and management of the Society.

In areas such as policy formation, training and events, the RHS also works with other national bodies: the Historical Association, which leads on history in schools; the Institute of Historical Research, a national centre for research resources; and History UK (HE) a council of representatives of UK university history departments.

The RHS is governed by its By-Laws. The RHS Membership is also subject to regulatory procedures. Further information is available here.

Revisions to the By-Laws are made, on approval, at the Society’s Annual General Meeting, held each November.

The RHS seeks to represent the interests of historians, to promote the value of historical scholarship and to support the highest possible standards, not just in publications and institutions but also in the conduct of individual historians and in the teaching of the discipline. The RHS Statement on Ethics (updated October 2020) indicates some of the main areas that touch on historical practice.

The Society has increasingly taken on new outward-facing functions, particularly as government demands on the academic system have intensified, and as the universities look primarily to their own institutional interests.

The situation has left a vacuum — the defence of the public interest in academic freedom and high-quality research on behalf of the whole academic community — which we have sought to fill. This has involved engaging in public debate, lobbying and input into formal consultation processes on a range of issues from freedom of information to the school curriculum to research funding. It has also required the voluntary leadership to develop more regular and sustained communication with academic historians around the country, in order to get the sense of the community and to identify emerging issues and points of controversy.

Today the Society is at the forefront of public policy debates. Among the issues we have actively and effectively taken up are freedom of information and data protection, the advent and organisation of a research council for the arts and humanities, the research assessment process in universities, the funding and organisation of local and national record offices.

Most recently, we have been working on open-access publishing, equality, diversity and inclusion in History Higher Education, and the defence of post-92 history departments threatened with closure. Results of this work can be found in the Policy and News sections of the website.

Public Statements issued by the RHS

The Royal Historical Society is dedicated to supporting historians individually and as a discipline, and to encouraging, facilitating and supporting work towards greater equality, inclusion and representation in historical practice, research and teaching.

However, the Society does not normally comment in public (e.g. through social media) on situations such as industrial disputes or redundancy decisions, particularly when these are the province of trade unions.

Individual RHS Staff, Council members and Officers are of course free to express their personal opinions on such matters, but we ask that they take into account the RHS Social Media guidelines when doing so.

In circumstances where UK History departments or programmes face closure or downsizing, or in other particular situations involving Members or Fellows we are happy to work with affected staff at a local level at the direct, confidential request of staff in affected units.

The Society’s Academic Director is the first point of contact in this context. Contact details of RHS staff can be found here.

If you have any queries about the Royal Historical Society, its work, or website, please contact the RHS Office on: administration@royalhistsoc.org.