Inequality remains a major challenge for historians in UK higher education. The Royal Historical Society is today an important voice for equality in the discipline and profession. This work takes many forms, and continues to develop and evolve in response to circumstance.

The Society seeks to provide practical support where it’s most needed and impactful—often in partnership with organisations with shared aims. Current initiatives are either led by members of the Society’s Council (its governing body) or in partnership with external groups. In 2022, these include:

— co-sponsorship (with the Runnymede Trust) of the Harriet Tubman Essay Prize, run by the British Association for Nineteenth-Century American Historians (BrANCH). The prize is awarded annually for the best undergraduate essay or research project by Black, Asian, or other minority ethnic students based in the UK.

— funding for the Social History Society’s BME Small Grants programme; these grants of up to £1000 support Black and Minority Ethnic historians working in the UK and/or histories of BME people.

The Society’s current equalities work is informed by the findings of its important studies on the historical profession relating to gender, race and ethnicity, and sexual identity: 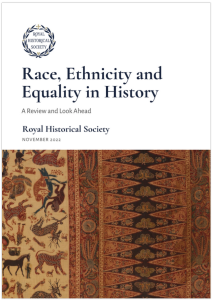 Of these initiatives, the Society’s Race Reports has been particularly widely adopted. Between 2019 and 2022, this programme has been supported by an RHS Race, Ethnicity & Equality Fellowship, generously funded by the Past & Present Society.

The contribution of this Fellowship, and the future of the Society’s race equalities work, is summarised in ‘Race, Ethnicity and Equality in History. A Review and Look Ahead’ (November 2022).

If you wish to contact the historians who make up the Society’s Council (trustees) about current or potential areas of equalities work, please email: equalities@royalhistsoc.org.