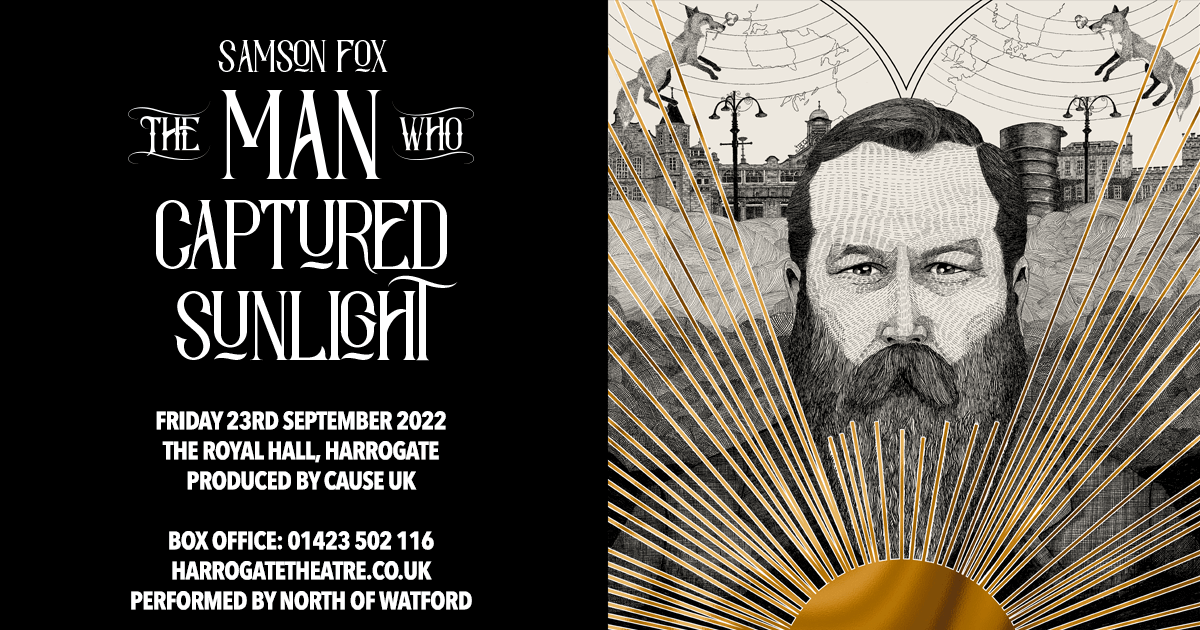 For the first time, the remarkable story of one of the UK’s most meteoric inventors, Samson Fox, will be brought to dramatic life on stage by North of Watford on 23rd September 2022.

North of Watford has a reputation for representing the most talented and professional actors in the North.

The Man Who Captured Sunlight will be performed in the theatre Samson Fox was instrumental in building – Harrogate’s Royal Hall.

Samson Fox was Mayor of Harrogate from 1889 to 1892, and is the forebear of Britain’s most famous acting dynasty. His grandchildren and great-grandchildren have starred in epic movies, from Edward Fox in the Day of the Jackal, to Emilia Fox in Silent Witness, and Freddie Fox in The Crown.

Samson was born into poverty in Bradford in 1838 and worked in the mills from the age of nine.

As an inventor, he helped spearhead the Industrial Revolution. An impresario of his day, he famously ‘bottled the sun’ as Harrogate’s streets became the first thoroughfares in the world to be lit with his Fox Water-Gas.

Joe Standerline, who has appeared in TV shows such as Victoria (ITV), The Full Monty (Disney Plus) and Safe (Netflix) will play Samson Fox.

Sian Murray, director of the play, said: “It’s a dramatic, engrossing story that deserves to be told and one that Harrogate, and the North as a whole, should celebrate. It’s also thrilling to bring to life a new and original stage play, performed in the very theatre Samson himself was instrumental in building in Harrogate – the beautiful Royal Hall.”

The play charts Samson’s meteoric rise. A Hollywood movie was even inspired by Fox’s inventions, but befalling him later in life was a controversial court case with the literary figure, Jerome K Jerome.

Cause UK, the Harrogate-based creative agency are producers and sponsors of the play.

Clair Challenor-Chadwick, director of Cause UK, said: “We’ve been aware of Samson Fox for many years, yet little is known about him in the public consciousness. He was the Elon Musk of his day, and we hope this play will help reclaim his place in history, as celebration of his life and remarkable legacy. He was instrumental, not only as a great engineer and inventor, but in the building of the Royal Hall, Harrogate’s ‘glittering palace of gold’, as well as the Royal College of Music in London. Harrogate, and the nation, owe him a huge debt of gratitude.”

Advisors on the project include local historian Malcolm Neesam, and actors Edward and Freddie Fox.

Freddie Fox said: “Having just put the script down, I can honestly say I thought it was brilliantly written. Insightful, moving, funny, poignant… I think it’s a really terrific portrayal of its subject and characters. Gavin has woven the poetry and theatre of the Fox’s of today into the fabric of the lives of our industrialist predecessors – a beautiful touch – In short, I loved it!”

There will be an audience Q&A with the Fox family (film commitments permitting), playwright, actors and director after the performance.

There is a matinee and evening performance on 23rd September 2022 at the Royal Hall in Harrogate.  Buy tickets here: https://www.harrogatetheatre.co.uk/whats-on/The-Man-Who-Captured-Sunlight