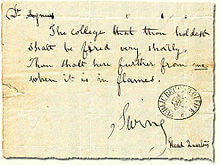 East Anglia has a rich but often overlooked history of radicalism and this conference will introduce people to some aspects of this history and provide a focus for a renewed interest in Labour History. Labour radicalism in East Anglia has taken many different forms, ranging from the struggle by the farm-workers to establish their own trade union and their continuing fight to earn a living wage, to the colourful Christian Socialism of the Thaxted Movement in north-west Essex. These rural struggles were not isolated from the cities but drew on them for support and sometimes inspiration, and in turn their radicalism shaped the nature of the early Labour Party. During the day, the speakers will not simply describe the events that occurred, but will explore the ways in which people organised and sustained their struggles, often over many years.

There is no charge for attending the Conference, but people wishing to attend are requested to reserve their place by booking with eventbrite, using the link at the foot of this email. There are 50 places available.  Please note that the organisers reserve the right to change the programme without notice

This paper will explore the origins of the Labour Party in Cambridge and South Cambridgeshire where early activists sought explicitly to unite disparate forms of political association among light-industrial and railway workers in Cambridge who were traditionally attached to the Liberal Party, various congregations of dissenting Protestants, agricultural labourers, and academics. It will demonstrate how these groups were often difficult to hold together and, as a result, how slow  and sporadic the development of organised Labourism was in a university-oriented market town on the edge of the Fens.

Ashley Walsh is a doctoral student at Downing College, Cambridge, specialising in eighteenth-century British intellectual history. He is also Leader of the Labour Group on Cambridgeshire County Council. Along with Richard Johnson, he wrote ‘Camaraderie: One Hundred Years of the Cambridge Labour Party, 1912-2012’ to mark the centenary celebrations of the Labour Party in Cambridge.

This paper discusses Arthur’s Thaxted work, in particular highlighting those issues which have emerged in the course of his research and which remain to be resolved, not least because of their invisibility in the standard accounts of Conrad Noel, the Battle of the Flags and the Thaxted tradition.

Professor Arthur Burns is vice-dean for Education in the Faculty of Arts and Sciences at King’s College London and a vice-president of the Royal Historical Society. He has published widely on the history of the Church of England from the eighteenth to the twentieth centuries, and is a director of the online Clergy of the Church of England Database 1540-1835. He has also written on nineteenth-century reform and the history of walking. He is currently working on a book on the Christian Socialist tradition in twentieth-century Thaxted.

Rural resistance in early 19th century England was never isolated from the concerns of town dwellers. Indeed, in this period of rapid urbanization, resistance commonly occurred in the ‘neighbourhood’ or ‘edgelands’ of urban areas: places where boundaries were challenged or changed by changing agricultural and industrial economies. This paper explores rural resistance in these areas, especially focusing on the East and North Ridings of Yorkshire, and disputes over enclosure and the Swing riots of the early 1830s. It draws from two ways of thinking about protest and place: first, the early modern historian Andy Wood’s conception of place as custom; second, the geographer Doreen Massey’s conception of protest as a ‘critique of dispossession’. It argues that, even though rural areas may not have been as responsive to national political movements such as Chartism, their protests were not backward-looking or reactionary, but connected to wider critiques of the impact of national economic change.

Dr Katrina Navickas is senior lecturer in history at the University of Hertfordshire. She researches popular protest in 18th and 19th century England, and also has a developing interest in using digital methods in historical research. Her latest book is ‘Protest and the Politics of Space and Place, 1789-1848’, published by Manchester University Press.

“The most striking labour advance of the year 1872 was to be the work, not of the town artisans, but the farm labourers; was to come not from the great centres of industry, but from the villages where squire and farmer looked invincible in their absolute dominion over the seemingly helpless, servile, and spiritless rural poor.” (Reg Groves: ‘Sharpen the Sickle!’).

Martyn Everett was formerly a librarian, and is the author of several books.  He is also a member of Unite Community Union.

On April 1st 1914 the school children of the Norfolk village of Burston went out ‘on strike’ in support of their teachers who were being victimised from their employment by the local school managers and Parson. Tom and Annie Higdon had arrived in Burston after being forced into take a transfer from their previous posting because of Tom’s organising of the local agricultural labourers’. But rather than that outcome being repeated, the day marked the beginning of what would become known as the Longest Strike in History.

Shaun Jeffery is a horticulture worker; a member of Unite’s Food, Drink & Agriculture Region and National Committee’s, Secretary of the Burston Strike School Museum Trustees and one of the Strike School Rally organisers.

In 1921 at a by-election Labour won its first truly rural seat – South Norfolk. They lost it at the general election of 1922 and won it again in 1924. This paper will examine the long-term background to that victory in the history of rural radicalism and trades unionism in the county.

There is no charge to attend the conference but people are requested to book in advance via Eventbrite: