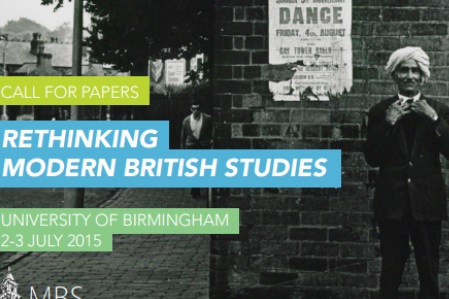 Modern British Studies at Birmingham was launched in February 2014 to explore new and interdisciplinary ways of thinking about British society, culture, politics, and the economy in the nineteenth and twentieth centuries. We will host our first international conference on 2-3 July 2015, and now invite scholars working across the historical humanities and social sciences to submit proposals for sessions.

Modern British Studies at Birmingham set out our intellectual agenda in a collaborative working paper. Challenging what we see as the problematic disciplinary, analytic and theoretical fragmentation of the field, the paper offers new interpretive frameworks around which to structure further research and encourage public engagement. Our focus is on what we call ‘cultures of democracy,’ and the position of the individual in the age of an emerging mass democracy and mass culture. From the early nineteenth century onwards, new political and cultural forms transformed the nature of political and social life. Yet these changes took place in the context of persistent and deep-rooted inequalities of class, gender, race and ethnicity, sexuality, age, and religion. Our aim is to understand the diverse patterns of democratic participation across the last two centuries.

These are pressing intellectual issues. The vibrant debates over Scottish independence, means they are also compelling public issues. What happens to British studies, if Britain itself no longer seems meaningful? Recent discussion of the commemoration of the Great War, the relationship between public engagement and the commercial media, and the reassertion of traditional versions of a ‘national story’ make important for historians to engage with debates over history’s place in national life.

Modern British Studies at Birmingham’s first working paper set out our ideas not as a coherent and exclusive agenda for the future. Instead it is a prompt for critical discussion and debate — a starting point for scholars working across disciplines on nineteenth and twentieth century Britain. Our plenary speakers, including Deborah Cohen (Northwestern), Catherine Hall (UCL), Seth Koven (Rutgers), James Vernon (Berkeley), and Stephen Brooke (York University, Toronto) will respond to the working paper and set out their vision for the future of the field.