Home > Events > Neglected Narratives: The Failure of Nazi Espionage, Subversion, and Sabotage in the Middle East 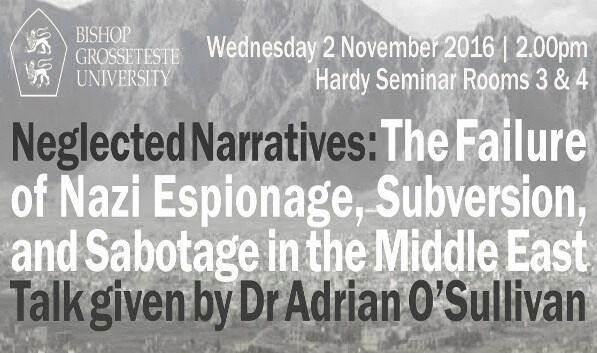 In 1941, the espionage activity and subversive potential of the German diaspora in Persia (Iran) became unacceptable to the British and the Soviets, leading them to invade and occupy the country in August of that year. Evading deportation, several Nazi intelligence officers continued active espionage and subversion operations as staybehind agents. After Stalingrad, the spymasters in Berlin changed their focus to sabotage against the US Lend-Lease supply route across Persia. Of 14 documented special operations planned against Persian strategic targets in 1943 the Germans executed only three, all of which failed. Two operations were also executed in Iraq with equally disastrous consequences. Meanwhile, Allied security forces were effectively employed to safeguard from Nazi attack and indigenous sabotage all strategic assets in the region. Historians, especially intelligence historians, have negected this period of Middle Eastern history.

Seventy years on, Dr Adrian O’Sullivan’s books are the first full-length monographs to be written on the subject and are based on records that were until very recently classified as top secret. Dr O’Sullivan is an Emeritus Fellow of the Royal Historical Society. This is a public lecture (all welcome and free to attend: no booking required).