On 7 July, the RHS responded to the REF2021 Survey on proposed modifications to the 2021 Research Excellence Framework (REF), to take account of the effect of COVID-19 on REF submissions.

Find out more about this process here: https://www.ref.ac.uk/news/second-webinar-scheduled-on-ref-revisions/.

Today, at a regularly scheduled Council meeting, the Royal Historical Society considered a motion under Article VIII of its by-laws, relating to the conduct of a Fellow. As a registered charity, we have proceeded according to our legally binding by-laws in the discussion of this matter and the balloting of Council.

We received numerous communications from Fellows and Members of the Society forcefully registering their objections to Dr David Starkey’s comments, and to his Fellowship status.

Following discussion by our elected Council and officers, it was unanimously resolved by ballot that these comments were clearly (as per the wording of Article VIII) “inconsistent with membership of the Society”.

Our by-laws state:
‘If the conduct of any Fellow, Associate or Member, or of any elected Officer or Councillor, shall appear to the Council to be inconsistent with membership of the Society, or with the office held, or with membership of the Council, the Council may, by ballot and by the vote of not less than two-thirds of the members of Council present and voting, resolve that he/she be requested to resign. A Fellow, Associate, Member, elected Officer, or Councillor so requested shall have the right of appeal to a Special Meeting of the Society, at which the question shall be decided by ballot; and if the recommendation of the Council be approved by the vote of two-thirds of the Fellows present and voting this shall take immediate effect as if the resignation so requested had been received.’

RHS President Professor Margot Finn states: “We unequivocally condemn Dr Starkey’s utterly repugnant comments. The Royal Historical Society has a clearly articulated commitment to equality. This commitment includes a categorical and unequivocal rejection of racism, which these remarks clearly display. Our work to identify and challenge inequality (including racism) in our discipline is proactive and ongoing.”

Update: On Monday 13 July 2020, in response to Council’s resolution of 3 July 2020, Dr Starkey tendered his resignation of his Fellowship of the Royal Historical Society.

The RHS has made a substantial response to the UKRI Open Access Review, the outcome of which will determine open access policies for the UK Research Councils and inform the requirements for outputs submitted to the REF after REF2021.

Full information about the UKRI consultation is available here: https://www.ukri.org/funding/information-for-award-holders/open-access/open-access-review/.

In April 2021, in response to COVID-19, REF 2021 invited views from the HE sector on two central issues for the revised exercise: the timing of the new submission deadline; and the broad approach to taking account of effects on impact case studies.

Following discussion in Council (Friday 1 May 2020), the Royal Historical Society submitted a response to the two questions posed.

The Shortlist for the 2020 RHS Gladstone Book Prize has been announced today.

The list recognises the scholarly contribution and quality of six excellent history monographs. This is one of two annual book prizes awarded by the RHS each year.

The overall winner will be announced in July.

Find out more about all the nominated books for this year’s Gladstone Prize on the Historical Transactions blog.

Each year, the Royal Historical Society aims to support around 200 UK-based early career researchers (of any nationality) with grant awards totalling just over £60,000. COVID-19 is having a major impact on the scholars we would normally fund. Today, the Royal Historical Society is announcing two new schemes to support UK-based early career researchers in History during this time.

The current novel coronavirus outbreak is a rapidly-developing international situation, which will cause significant ongoing disruption.

The Royal Historical Society has produced guidance to support RHS staff, Council members and grant recipients. This will be updated on the website at https://royalhistsoc.org/covid-19/.

The RHS is committed to supporting our community of scholars during what we realise is a very difficult time.

Our priorities at this time are:

We will continue to share any changes as they are confirmed. Thank you for bearing with us as we adapt our standard policies and working patterns to accommodate this set of exceptional circumstances.

Please direct general communication to enquiries@royalhistsoc.org. If you have specific queries about grant-funded activities affected by the coronavirus outbreak please contact Imogen Evans on adminsecretary@royalhistsoc.org.

All the best to everyone.

REF 2021 is now inviting nominating bodies to put forward names for additional members, including both output and impact assessors, of the History sub-panel. These are to cover the specific areas of expertise listed below (although sub-panellists are also expected to read outputs outside their specialisms). The RHS is a recognised nominating body to REF, having passed an Equality and Diversity audit, and will submit a set of nominations for these positions. 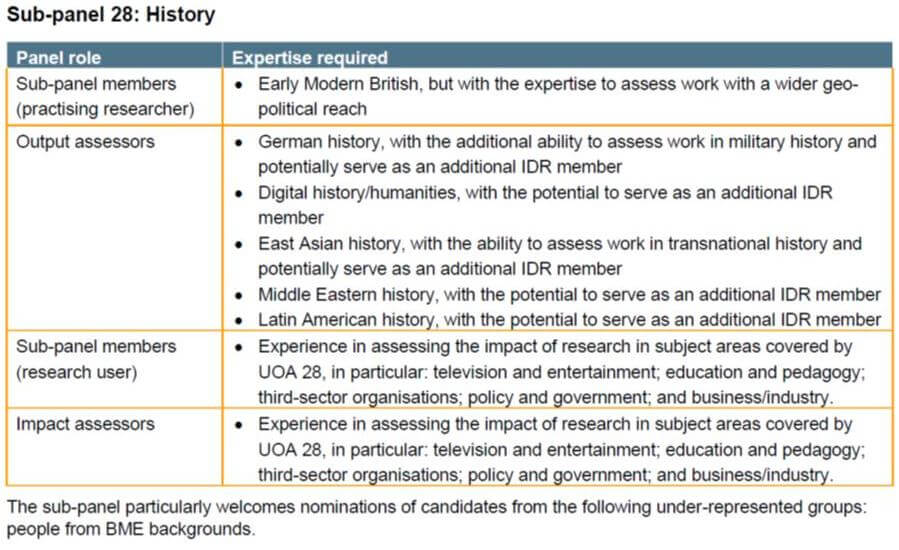 We have already received a significant number of nominations for most of the positions on the sub-panel and we do not wish to keep this process open indefinitely.  Therefore, the RHS has decided to extend the deadline for its call for nominations to the REF sub-panel to 3 April 2020.  After this a virtual working group will review the nominations and those which are endorsed will be uploaded to the REF website.

We would particularly welcome further nominations for the assessor positions in East Asian, Middle Eastern, and Latin American history; and for indications as to if the nominee would also be willing to serve as a second Interdisciplinary Research advisor on the sub-panel.   Nominations are also being sought for sub-panel members and impact assessors who are research users.

Members are therefore requested to send nominations for consideration for inclusion in the RHS list to Prof Jonathan Morris, Vice President for Research Policy at vice-presidentjm@royalhistsoc.org  stating the role for which they are nominating the individual and confirming that the nominee has consented to the nomination.

Ideally nominations should be accompanied by 2 or 3 sentences indicating the nature of the nominee’s work in relation to the specific position, any relevant professional experience, and whether they engage in interdisciplinary activities.

Please note that the RHS will not consider self-nominations, nor nominations from individuals from the same institution as the nominee.

Due to very short turn-around times all nominations must be received by 3 April 2020.

This news item was originally published on 25 November 2019. It was updated on 19 February 2020 to provide updated information about the second wave of strike action scheduled for February and March 2020.

In autumn 2019, members of the University and College Union (UCU) voted in favour of industrial action, with branches at 60 Universities reaching the 50% support threshold.  Following a further ballot of members in early 2020, UCU announced on 3 February 2020 that seventy-four UK universities would undertake 14 days of strike action in February and March, after more institutions reached the 50% threshold.

The action centres on two disputes: 1) a dispute over changes to the USS pensions scheme (79% of UCU members who voted did so in favour of industrial action on this ballot) and 2) a dispute over pay, equality, casualisation and workloads (74% in favour of strike action). Collectively, these are being described as the “Four Fights”.

A second round of strike action is scheduled to take place on the following dates:

Several universities have agreed local variations of these dates with UCU. At UCL, where RHS is physically based, Thursday 20 & Friday 21 are not strike days, however Thursday 19 & Friday 20 March are strike days at UCL, and thus will have a picket.

In addition, many UCU members are continuing to undertake ‘action short of a strike’.

The Royal Historical Society (RHS) has members on both sides of this dispute, members who work at universities that did not reach the required threshold for industrial action, members who are not unionised or who belong to unions not engaged in this dispute, international members, and members outside higher education.  In this context and as a registered UK charity that is not itself a party to this dispute, the Royal Historical Society does not take a declared position with respect to this industrial action. However, the RHS strongly supports members’ legal and moral right to undertake strike action, and accepts that aspects of our own work – the vast majority of which is undertaken by volunteers – may be delayed or interrupted during this time.

As previously, many members of the RHS Council will be participating in strike action. Our final committee and Council meetings for 2019 as well as the Society’s AGM were initially scheduled for 29 November, during the strike period.  By a strong majority, Council voted to move these meetings to 6 December 2019, after the strike ended.  This decision ensured that the Society meets its legal obligations to the Charity Commission whilst avoiding any necessity for Council members or seconded committee members to cross a picket line.

RHS staff, as employees of a registered charity that is not a university or college, are not eligible for membership in UCU.  The RHS office is however physically located at UCL, one of the 60 universities participating in the UCU strike.  All RHS staff have been offered the option for the duration of the strike to work from home without any prejudice should they wish to do so.  Likewise, RHS staff who choose to attend work at UCL during the dispute can do so without any prejudice. RHS Members wishing to access the RHS office during the dispute are advised that there will be pickets at the UCL entrances, and as is ordinarily the case, they are advised to call or email in advance to check that the office will be open at the time of their intended visit.

Questions from the RHS membership on this matter should be directed to rescommsofficer@royalhistsoc.org.

More information about the two disputes can be found on the UCU website.

The employers’ (UUK) perspective on the pensions dispute can be found on the UUK website.

The employers’ (UCEA) perspective on the dispute on pay and conditions can be found on the UCEA website.

At its meeting on 6 December 2019 the RHS Council elected 79 Fellows and 36 Members, a total of 114. These new members were formally welcomed to the Society at Dr Andrew Arsan’s RHS Lecture on Friday 7 February 2020.

Women comprised forty-five percent of the new Fellows and fifty-eight percent of those elected to the Membership. In terms of geographical distribution, our new members are based both in various parts of the UK and around the globe – in Australia, Canada, China, India, and the USA.

The majority of the new Fellows hold academic appointments at universities, specializing in a very wide range of fields; but also include a broadcaster, a properties historian, and an academic librarian. The new Members also have a wide variety of historical interests, including those employed in universities, school teachers, an archivist, an historic environment record project officer, an author of historic tours scenarios, and a rare books curator.

All those newly elected to the Fellowship and Membership bring a valuable range of expertise and experience that will help the Society to fulfil its objective of representing the diverse body of those engaged in historical scholarship.