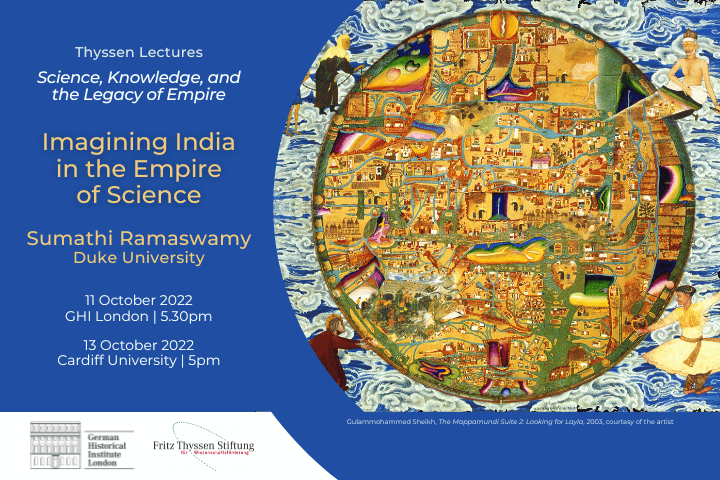 Join us on 11 October for the first lecture of our new series in collaboration with the Fritz Thyssen Foundation.

The imperial and colonial contexts in which modern science and scholarship came of age haunt us to this day. Be it the origin of museum collections, the Eurocentrism of history textbooks and academic curricula, or the lack of minority ethnic university staff—the shadows of an imperial past loom large upon us today.

The German Historical Institute London is proud to announce its collaboration with the Fritz Thyssen Foundation in the form of a new lecture series on Science, Knowledge, and the Legacy of Empire consisting of eight lectures over the next four years. Join us for the first lecture of the series given by Sumathi Ramaswamy, James B. Duke Professor of History at Duke University, Durham, North Carolina, USA, on 11 October 2022 at the GHI London. She will talk on ‘Imagining India in the Empire of Science’:

‘Imperialism is an act of geographic violence through which virtually every space in the world is explored, charted, and finally brought under control. For the native, the history of his or her colonial servitude is inaugurated by the loss to an outsider of the local place.’ Taking its inspiration from this provocation by the late Edward Said (1990), my paper focuses on a range of modern knowledges which I gloss here as earth sciences, among which I include geology, paleontology, natural history, and most especially, geography and cartography. I explore how these sciences imagine one specific location on the earth’s surface, ‘India,’ as a knowable place over the course of two centuries of British colonial rule. I then consider the many ways in which the colonized peoples responded and reacted to the manner in which science was deployed in the age of empire to put them in their place, literally. (Abstract by Sumathi Ramaswamy)

The lecture will be followed by a reception in the GHIL library. All are welcome to attend. Please register by following this link: https://www.eventbrite.com/e/thyssen-lecture-sumathi-ramaswamy-duke-university-at-the-ghi-london-tickets-403369678567.

The Fritz Thyssen Foundation was established on 7th July 1959 in memory of August and Fritz Thyssen for promoting science and research. It was the first large private individual foundation promoting science and research to be founded in the Federal Republic of Germany after the Second World War. It supports research in the fields of history, language and culture, state, economics and society as well as medicine.

The German Historical Institute London, founded in 1976, is dedicated to the promotion of historical research in the United Kingdom and Germany. It focuses on the comparative history of Britain and Germany, the global and colonial history of the British Empire and Commonwealth, and the history of British-German relations and transfers. More recently, though its India Research Programme, the GHIL has also built close links with scholars in South Asia. The Institute runs academic lectures and conferences, supports international networks, provides research training, awards prizes to outstanding scholars, and offers advice to collaborative projects involving German and British researchers.