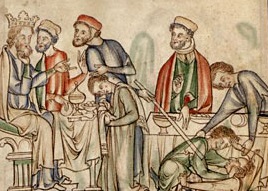 Dr Edmonds will investigate the rise and fall of the Northumbrian kingdom, the original ‘northern powerhouse’. At its height (c. 685), the kingdom the kingdom spanned the territory from the Mersey to south-west Scotland, and from the Humber to the Forth. Edmonds pays particular attention to the west of the Northumbrian kingdom, asking how the polity expanded into the areas we now know as Lancashire and Cumbria, and why this territory was considered valuable. The answer lies partly in the importance of links to the Irish Sea region.

Dr Edmonds is a historian of medieval Britain and Ireland, with research interests ranging from the sixth century to the twelfth. Her work knows no borders, focusing on maritime connections and now-lost kingdoms. Particular areas of interest are the Irish Sea region in the Viking Age, and ‘Middle Britain’ (northern England and southern Scotland) prior to the Anglo-Scottish border. She is interested in interdisciplinary work, for example combining historical and linguistic evidence through the study of names. She is the Director of the Regional Heritage Centre at Lancaster University.