Home > Events > The Parachute Regiment and the Falklands War 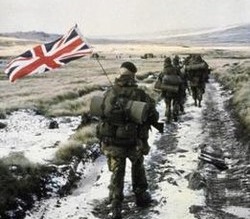 The 2018 Annual Lecture for the Sir Michael Howard Centre for the History of War at King’s College London will be by Dr Helen Parr of Keele University, around her recent book ‘Our Boys’.

The Parachute Regiment played a prominent role in the 1982 Falklands conflict. They fought iconic battles at Goose Green, Mount Longdon and Wireless Ridge, and won both the war’s Victoria Crosses. Combat in the Falklands transformed the Paras’ reputation in the public mind, and moved them away from the legacies of their involvement in Northern Ireland. This lecture examines this elite unit of the British Army before, during and after the Falklands war; and in so doing, offers a window into Britain’s changing society in the 1970s and the 1980s. Who were the men who chose to join the ranks of a Regiment like the Paras in the 1970s? How did they experience combat in the Falklands? And what did it mean, for them, their families, and for Britain, after they returned home?

Helen Parr teaches at Keele University. She has previously written on Britain’s relations with Europe. This lecture marks the publication of her book, Our Boys: The Story of a Paratrooper (Allen Lane, 2018).