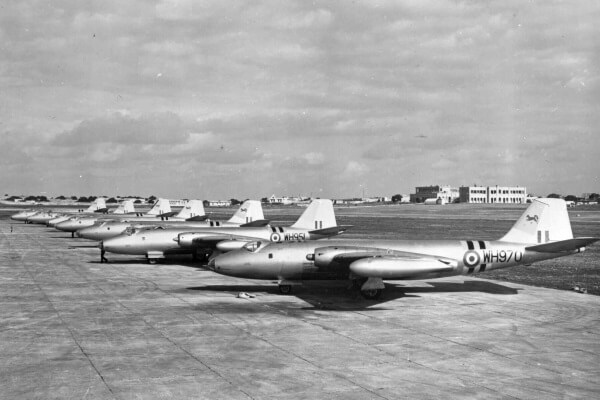 Dr Tim Benbow of King’s College London at the Joint Services Command and Staff College examines the planning for the Suez operation in 1956.

The role of air power in the British-French Suez operation of 1956 is widely covered in published work. This literature, however, focuses almost exclusively on what happened; there is a striking gap relating to what did not happen – specifically, the planned air campaign. In stark contrast to what actually transpired, the military plan relied to a significant extent on strategic bombing.

Due to a range of political, diplomatic and military concerns, an opposed amphibious landing and a prolonged campaign on land were both undesirable, so as the ‘Musketeer’ plan gave way to ‘Musketeer Revise’, considerable weight came to be placed on strategic air power. Bombing of Egyptian military, political and economic targets would either topple the Egyptian government or at least compel it to capitulate, at which point an amphibious operation would be conducted merely to occupy the Canal zone, with the core political goal of the war already achieved. Remarkably, this was in theory the plan that was implemented. In practice, however, the heavy political and military restrictions that were placed on bombing from the outset (precisely as some senior officers had predicted during the planning stage) meant that the original vision was quite unachievable and the actual operation bore little resemblance to the intent of the planners. Air power played a central role in the operation but not at all in the way that had been envisaged.

This paper will investigate British military planning for the Suez intervention, focusing on the air campaign. It will explain why a plan with strategic bombing at its heart was adopted and why it was not implemented. In doing so, it will explore some of the problems encountered as Britain sought to square the circle of conducting military operations under increasingly tight political constraints, and as ideas that had dominated during the Second World War were revised and refined for the era of limited war.

Please note that this lecture will be held at the Headquarters of the Royal Aeronautical Society at No. 4 Hamilton Place, London W1J 7BQ at 18:30PM on Thursday 20 October 2016.

This lecture is free of charge however: we do ask that you pre-book a free ticket, as seats are limited. Booking is quick and easy, we just need some basic contact information.

Dr Tim Benbow studied at Oxford as an undergraduate (at Brasenose College) and as a graduate (at St Antony’s College). He also spent a year at Harvard University as a Kennedy Scholar and a year at King’s College London. After being awarded his doctorate he remained at Oxford, conducting a post-doctoral research project and teaching International Relations and Strategic Studies at the undergraduate and graduate levels, including one year as a Tutor in Politics at University College. Dr Benbow spent two years teaching at Britannia Royal Naval College, Dartmouth, before joining the Defence Studies Department in 2004. He was promoted to Senior Lecturer in 2008 and to Reader in 2016. Dr Benbow is Maritime Historian on the Higher Command and Staff Course; Deputy Director of the Corbett Centre for Maritime Policy Studies; and Director of the Strategy and Defence Policy Research Centre.