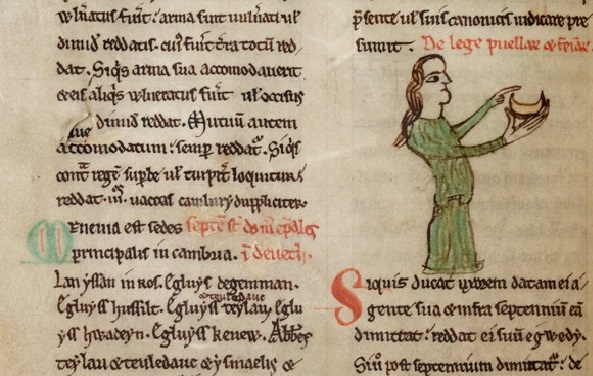 This lecture will explore the role played by gender in medieval Welsh legal writing. The lawbooks of medieval Wales, have recently been argued to have narrative qualities rendering them susceptible to several different kinds of analyses including standard historical readings, scrutiny as law, and more literary critical methods. Robin Chapman Stacey will examine the ways in which ideas about male and female inform lawbook depictions of space and time, animal and human bodies, and everyday practices such as farming.Speaker: Professor Robin Chapman Stacey, University of Washington

Robin Chapman Stacey is Professor of History at the University of Washington. Her past books include The Road to Judgment: From Custom to Court in Medieval Ireland and Wales (1994); Dark Speech: The Performance of Law in Early Ireland (2007) and Law and the Imagination in Medieval Wales (2018). She has been the recipient of fellowships from the Guggenheim Foundation and the American Council of Learned Societies and is a past winner of the University of Washington’s Distinguished Teaching Award.

As our public events are free, not everyone who registers for tickets attends. To make sure we have a full house we allocate more tickets than there are seats. We do our best to get the numbers right, but unfortunately we occasionally have to disappoint people. Admission is on a first come, first served basis, so please arrive in good time for the start of the event.