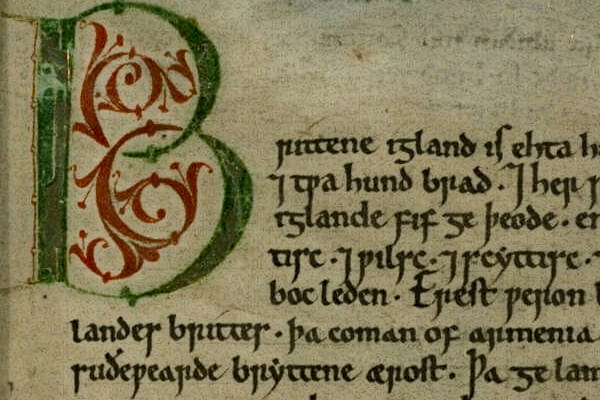 In the early 1950s the English Historical Documents series was launched, its aim to ‘make generally accessible . . .  fundamental sources of English history’. The first two volumes opened with the same text – the Anglo-Saxon Chronicle.  This text merited ‘pride of place’. It is with this text – or rather with the series of chronicles which go under this heading – that this lecture is concerned. These chronicles have long been accorded fundamental status in the English national story. No others have shaped our view of the origins of England between the fifth and eleventh centuries to the same extent. They provide between them the only continuous narrative of this period. They are the story that has made England.

My subject is the relationship between that story, these texts, and England: how they have been read and edited – made – in the context of the English national story since the sixteenth century; but also their relationship to, the part they may have played in, the original making of the English kingdom. The focus is on  developments during the tenth and eleventh centuries, when a political unit more or less equivalent to the England we now know emerged. Special attention will be given to their possible role in the incorporation of Northumbria into that kingdom.

These chronicles were made by scribes a millennium ago, and to some extent have been reworked by modern editors from the sixteenth century on. They are daunting in their complexity. The differences between them are as important as the common ground they share.  But understanding the making of these foundational texts has its own light to shed on the making of England.

Pauline Stafford is Professor Emerita of Early Medieval History at the University of Liverpool, and former Vice-President of the Royal Historical Society.