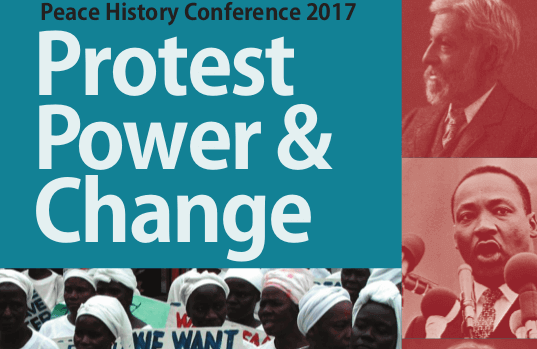 Protest, Power & Change is the theme of the 2017 Peace History Conference. Organised by Movement for the Abolition of War in partnership with Imperial War Museums, it will take place on Friday 9 and Saturday 10 June in London.

Frank Cottrell Boyce, children’s novelist and screenwriter, will open the conference. Among topics on the programme will be ‘Fewer Bombs, More Jobs: The Lucas Aerospace Combine Shop Stewards’ Alternative Plan 1976’ and ‘Lysistrata in the Rainforest: the women’s nonviolent campaign which ended the civil war in Liberia’.

Other sessions pick up on the anniversaries of 2017. It is 50 years since Martin Luther King’s momentous denunciation of the Vietnam War, 60 years since activists started coalescing into the movement that became CND, 150 years since the births of anti-war artist Käthe Kollwitz and feminist peace campaigner Emily Greene Balch, and 500 years since Erasmus published his ‘Complaint of Peace’.

PHC 2017 is timed to coincide with the exhibition ‘People Power: Fighting for Peace’ at IWM London, making a visit doubly worthwhile. (Exhibition ends 28 August.) The Museum is the venue for the Saturday conference, with additional events on Friday 9 June – an afternoon walk along the London Peace Trail (starts 3.30 pm from Tavistock Square WC1) and at 7.30pm the acclaimed play ‘This Evil Thing’, which tells the story of First World War Conscientious Objectors. Written and performed by Michael Mears, the play is at Oasis Hub Waterloo, 1a Kennington Road, SE1 7QP.

Peace History Conferences have taken place annually since 2007 in London, Manchester, or Leeds. They aim to tell the stories of individuals, movements, and ideas from all periods of history concerned with promoting peace, overcoming violence, and abolishing war.

For more information and to book tickets, please see the Movement for the Abolition of War website: http://www.abolishwar.org.uk/london-phc-2017.html