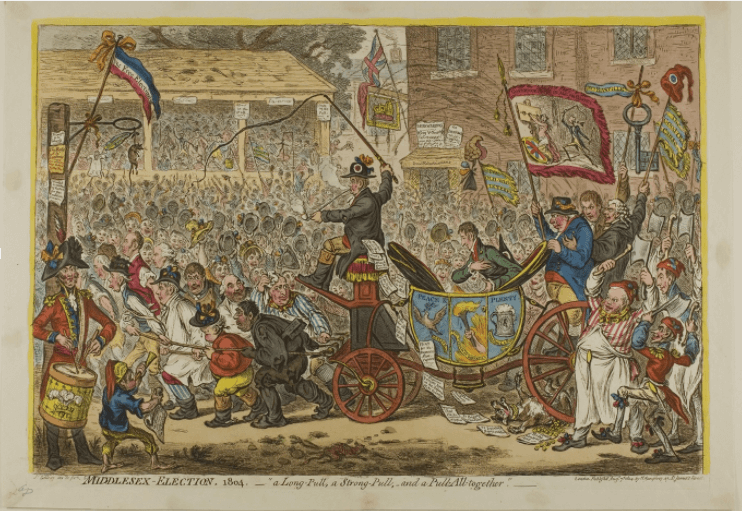 Although only a small proportion of the total population could vote, parliamentary elections were an enormously important aspect of eighteenth-century life. Elections selected MPs. But they were just as important in bestowing a sense of power and belonging on individuals and communities (even if only temporarily), in forming local and national identities, and perhaps in helping to forge a constitutionalist tradition.

Indeed, the poll itself was only part of the electoral process. Elections often engaged a much wider section of the population — both those with and without the vote. When elections were contested, and even sometimes when they weren’t, they could be accompanied by an explosion of print, satire, and song; countless ceremonies, processions, assemblies, and entertainments; new modes of dress, decoration, and consumer goods. They affected behaviour and famously were marked by varying, often extreme, degrees of social and economic investment. Men and women, adults and children, rich and poor, franchised and unenfranchised, might all participate — as audiences, but also as active makers of what was a unique cultural and political experience.

Deriving from the AHRC-funded Eighteenth-Century Political Participation and Electoral Culture (ECPPEC) project, this conference seeks to understand more about how people were involved in, and contributed to, electoral processes and culture, whether as voters, consumers or electoral actors of many different kinds. How were voters affected by the culture that surrounded them? Have we focussed too much on voting as the defining element of pre-Reform elections? Do we need new ways of analysing electoral participation and behaviour?

We invite proposals of c.250 words for papers on subjects related to the project themes. These might address any of the topics suggested below, or any other aspects of political participation and electoral culture in the long eighteenth century in England, Scotland, Wales or Ireland:

A special issue of the journal Parliamentary History will be based on papers from this conference, with publication scheduled for 2024.

Proposals to be submitted by email by 31 January 2022 to: