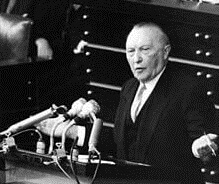 GHIL in cooperation with the IHR Seminar in Modern German History

Andreas Wirsching (Munich) will speak on ‘Nazi Legacies? The Question of Continuities in Postwar Germany’

Initiated first by private enterprise, later by federal ministries and other public institutions, contracted research on the history of the Nazi period and its legacies after 1945 is currently experiencing strong growth. The exploration of new archival sources has re-opened the question of Nazi-continuities in postwar Germany. The problem of how far former members of the Nazi Party and thus anti-democratic mentalities influenced the policies of the early Federal Republic (but also the German Democratic Republic) has become a dominant research question in current German contemporary history. The paper will discuss the preconditions for this trend, its implications and problems, and will ask what new results are to be expected.