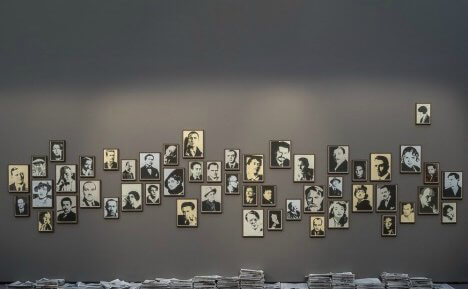 How is ‘history’ made? Whose histories are recorded for posterity? How have extra-institutional impulses complicated official (art) histories? This panel discussion focuses on notions of history, cultural memory and ‘history from below’ – allowing space for a critical reflection on how ‘history’ is made, and asking questions about whose histories are recorded for posterity in historical and contemporary art and curatorial practice.

What are the ways in which artists might work with historical materials and cultural memory? How do practitioners in other fields utilise visual materials arising from historical events? What new theories of looking and seeing arise from this work?

This event explores the ways in which historical memory is utilised as an artistic strategy and visual materials provide a means of allowing space for the reclaiming ‘hidden’ or ‘forgotten’ histories.

Inspired by the Fighting History exhibition, join us for a conversation amongst some of the most dynamic contemporary British voices on the relationship between history and contemporary visual culture.

Alex Farquharson – currently Director of Nottingham Contemporary – is the newly appointed Director of Tate Britain. Prior to taking up the position in Nottingham, he was an independent curator, writer and university lecturer. Farquharson has curated numerous exhibitions including British Art Show 6 (with Andrea Schlieker) and If Everybody Had an Ocean at Tate St Ives and CAPC Bordeaux. He was also a Tutor and Research Fellow on the Curating Contemporary Art MA at Royal College of Art in London, and wrote extensively on art and curating in international art magazines and publications. He was Curator, then Exhibitions Director, at Spacex in Exeter, 1994-99 and Exhibitions Director at the former Centre for Visual Arts in Cardiff, 1999-2000. He currently serves on the Arts Council Collection Acquisitions Committee and is a Trustee of Raven Row, London.

S. I. Martin is an author and researcher who has undertaken projects, research and training for numerous heritage organisations including the Black Cultural Archives, the National Maritime Museum, the Museum of London, the National Archives, several London boroughs and the BBC amongst others. He is the author of the novels Incomparable World, Jupiter Williams and Jupiter Amidships as well as the non-fiction title Britain’s Slave Trade. He is the founder of the 500 Years of Black London tours. He is the curator of a forthcoming exhibition on Black Georgians at the Black Cultural Archives.

Chloe Dewe Mathews is an award-winning photographic artist based in London. After studying fine art at Camberwell College of Arts and the University of Oxford, she worked in the feature film industry before dedicating herself to photography. Her work is internationally recognized, with solo exhibitions at the Tate Modern and the Irish Museum of Modern Art and editorial features in the Guardian, Sunday Times and Le Monde. Public and private collections have acquired her work, including the British Council Art Collection and The National Library of Wales. Chloe’s first monograph, Shot at Dawn, was published by Ivorypress in 2014. Her awards include the British Journal of Photography International Photography Award, the Julia Margaret Cameron New Talent Award and the Flash Forward Emerging Photographer’s Award. Chloe is currently the Robert Gardner Fellow in Photography at the Peabody Museum of Archaeology and Ethnology, Harvard University

Uriel Orlow is a London-based artist known for his modular, multi-media installations that focus on specific locations and micro-histories and bring different image-regimes and narrative modes into correspondence. In 2015 Orlow had solo exhibitions at Castello di Rivoli, Turin, John Hansard Gallery Southampton and Depo, Istanbul. Orlow’s work has also been shown at the 54th Venice Biennale, Manifesta 9 Genk, Recent British Artists Film and Video at Tate Britain, London and at other venues internationally.