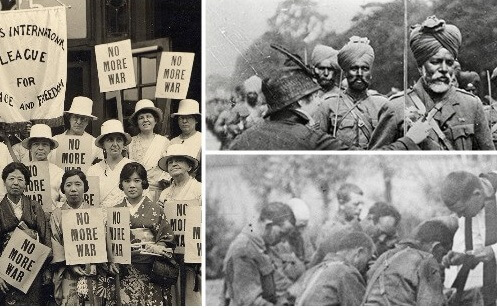 The extent and importance of religious faith in the First World War is undoubtedly one of the great rediscoveries of the centenary years. Among the belligerent empires and nations, religion proved to be a vital sustaining and motivating force, with the Ottoman war effort cloaked as a jihad, the United States entering the war on Good Friday 1917, and even professedly secular societies such as France experiencing a degree of religious revival. At the same time religious convictions also provided some of the most powerful critiques of the war, contributing to tireless peace-making efforts by Pope Benedict XV and to the stand of thousands of conscientious objectors in Great Britain and the United States. Faith also inspired many of the women who were active in war resistance and initiatives for peace, including Quakers, feminists and Christian socialists who were involved in the  Hague Peace Congress of 1915, the resulting Women’s International League, and also grassroots action such as the Women’s Peace Crusade, which was launched in Glasgow in the summer of 1916.

This conference seeks to explore the huge diversity and significance of religious faith for those who experienced the First World War, addressing themes such as faith in the armed forces and on the home front, religion, war resistance and the peace crusade, and the role of religion in remembrance.

Faith and the First World War call for papers

To register for the conference, please contact Dr Charlotte Methuen (charlotte.methuen@glasgow.ac.uk) or visit (https://www.eventbrite.com/e/faith-and-the-first-world-war-tickets-24680348587).   Cost to participants is £25.00 per day to include coffees, teas and lunch.   Please pay by cheque (made out to “The University of Glasgow”) or by cash on the day.   We can provide a list of local and university accommodation.