Home > Events > The Dutch Raid on Chatham Dockyard in 1667: its Anglo-Dutch Context and Legacy 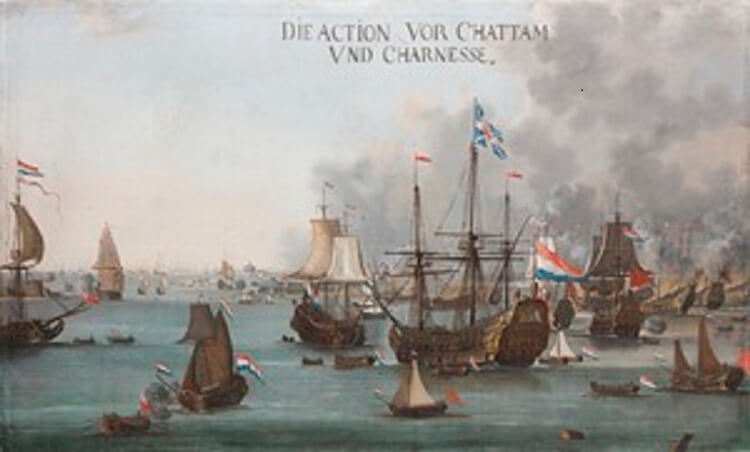 The Dutch Raid on Chatham Dockyard in 1667: its Anglo-Dutch Context and Legacy

The Vrienden van de Witt (NL) and the Naval Dockyards Society (UK) announce a major international conference to be held in Amsterdam on 23-24 June 2017, commemorating the 350th anniversary of the Dutch attack on Chatham Dockyard and the River Medway. This action, which culminated in the capture of the flagship Royal Charles, has traditionally been regarded as one of the most remarkable feats in the annals of naval history, and as one of the worst military defeats ever suffered by Britain.

The conference will be held at the Marine Etablissement (naval barracks) in Amsterdam, and conference proceedings will be held in English. Keynote speakers are Dr David Onnekink (Utrecht University) and Professor Henk den Heijer, (Professor Emeritus, Leiden University); the summary and conclusions will be provided by Professor John Hattendorf (US Naval War College, Newport, Rhode Island).

The conference will address a wide range of themes, including the causes and course of the second Anglo-Dutch war, early modern naval warfare and ideologies, the Dutch and British navies, dockyards and other naval facilities in the two countries, Dutch amphibious tactics during the Chatham attack, British responses to that attack, and the legacies and commemoration of the Dutch raid.

Further details can be obtained from Dr Ann Coats, anncoats49@gmail.com, and a booking form is available on the Naval Dockyards Society website, https://navaldockyards.org or download below: