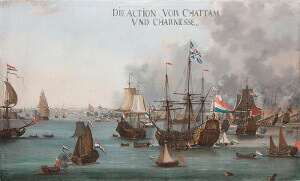 An international conference at Chatham Dockyard commemorating the 350th anniversary of the Dutch attack of June 1667. The attack brought a speedy conclusion to the Second Anglo-Dutch War which marked the height of the naval struggle between England and the Netherlands from 1652-1674. Commercial and imperial rivalries lay at the heart of this struggle in the North Sea, the Atlantic and Asia, but the interplay of political, ideological and institutional differences was equally important. At a time when Britain’s relationship with Europe is undergoing seismic and perhaps unpredictable change, the resolution of conflict and the resumption of new forms of cultural and economic co-operation between two historic allies surely deserve our renewed attention.

The conference will take place in the historic Royal Dockyard Church, recently transformed into a lecture theatre through partnership between the University of Kent and the Chatham Historic Dockyard Trust, the two bodies hosting the conference. Accommodation will be available in nearby university halls of residence at Liberty Quays.