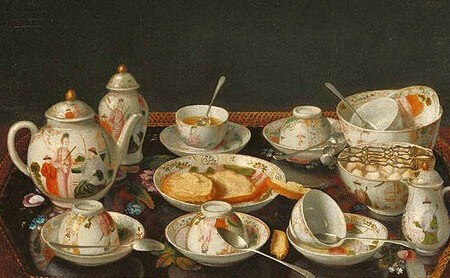 The eighteenth century was a period of discoveries and exotic encounters. Sailors and naturalists found new lands in the Pacific. Traders and settlers adopted food and dress practices which they then took back with them to Europe. Previously unknown animals like the kangaroo and the anteater made their first appearance on in European menageries and museums, drawing excited crowds to see them and sometimes inspiring contemporary art and design. Novel and exciting commodities such as coffee, tea and ceramics emerged in the eighteenth century as luxury and then popular consumer products. Imperial expansion brought new products within reach of increasing numbers of Europeans and mediated their acquisition and reception. Where exotic products had once been the preserve of royalty, many now came within reach of a much wider public, who incorporated elements or imitations of the exotic into their everyday lives.

‘Domesticating the Exotic’ explores these multiple encounters with the exotic in the long eighteenth century and considers how exotic people, animals and objects were gradually integrated into the European domestic sphere. The conference will trace the global networks that brought exotic items to Europe and the cultural and technological processes that transformed them into domestic commodities. It will also focus on the display and use of exotic goods in the home, and the use of exotic imagery to advertise and sell consumer products and in popular culture. Of particular interest are the ways in which the ‘exotic’ was appropriated, imitated and ‘naturalised’ by Europeans and the physical and figurative changes it underwent in the process. We also seek to problematize the concept of ‘exotic’ itself, charting its shifting fashions and frontiers and exploring the intersections between the ‘domestic’/ordinary and ‘exotic’/glamorous meanings of different products, practices and representations.

Themes for the conference include:
– The consumption of exotic foods and drinks, such as tea, coffee and sugar.
– The use of exotic textiles and their adaptation to European needs – e.g. cashmere, silk, alpaca and vicuña wool.
– Attempts to domesticate and/or exhibit exotic/wild plants and animals.
– The importation and imitation of exotic commodities, such as ceramics.
– The incorporation of ‘exotic’ motifs in domestic goods – e.g. wallpapers, carpets, accessories.
– Representations of the exotic in literature, art, theatre, and popular culture

Registration for the conference (£25 or £15 for students) should come to clare.bond@york.ac.uk : there is a small amount for funding available for travel bursaries for students to be allocated on a case by case basis: applications for this funding should be sent to the same address by 5 February 2016. For more information, and to register, visit: http://www.york.ac.uk/eighteenth-century-studies/events/domesticatingtheexoticconferencemarch2016/