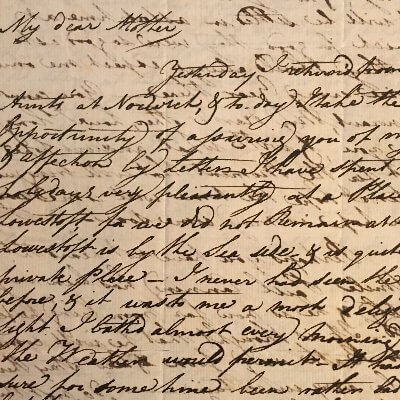 As part of the online conference ‘Distant Communications: making contact across time and space from antiquity to the digital age’, Professor James Daybell (University of Plymouth) will be giving a special pre-conference online keynote seminar on 12 July 2021 at 4pm BST.

His paper is titled ‘Epistolary Technologies of Separation and Archives of Emotion’ and it will be followed by a Q&A session.

Please note that this special event is part of a wider two-day online conference which will take place between 21st July and 22nd July on Zoom, and we will be welcoming speakers from around the world with papers exploring distant communications in a myriad of ways, spanning the medieval period to the present day. Professor Karen Harvey (University of Birmingham) and Dr Mark Ravinder Frost (UCL) will also be providing keynote plenary talks across the two days of the conference. Registration and details/programme for the conference will be released soon.

The organisers gratefully acknowledge the support and funding of the Royal Historical Society, the Social History Society, and the AHRC-funded Midlands4Cities DTP.

Abstract: This paper explores the concept of the letter as a technology of separation in order to understand the emotional experiences of the men and women who lived relationships at a distance in the early modern world. It interrogates a model of epistolarity which views the act of letter writing in simple binary terms predicated on a shared understanding of correspondence as a communicative form that bridges the geographical gap between sender and recipient, a model that is fundamentally instructive, but also more recently has been shown to be flawed by studies stressing the multi-agent complexities of letter-writing cultures. Structurally letters expose a series of relationships and circumstances that separated individuals: husbands and wives parted because of war, travel, business and politics; the changing nature of relationships between children and parents across the lifecycle as sons and daughters marry and move out, or leave home for education, learning and service; the elderly removed from loved ones by the ageing process; and patterns of migration that separated kin nationally as well as globally.

Studying a range of letter collections across the period 1500-1700, including transatlantic exchanges the articles addresses a series of questions relating to how people experienced separation materially and emotionally. How did early moderns cope with loneliness and isolation? How did men and women love, live and long, and sustain relationships across distances? Emotional states are reflected not only through the rhetorical and linguistic strategies of letters, but also communicated via material features which impart significant social and cultural meaning. Likewise, paratextual features, including enclosures such as objects and goods that accompanied privy communications emote in material ways. As a whole, the article examines the material letter as an object of emotion across its multiple itineraries from composition through delivery and reception to archiving and preservation. Finally, the very act of preserving letters, whether in bundles under beds, stored in boxes or carefully inscribed into letter-books, it will be argued represents a paper-related impulse connected to the art of memorialisation and the formation of archives of emotion. Such letters were collected and preserved as both a symptom and memory of separation during the sixteenth and seventeenth centuries.

He is Co-Director (with Kim McLean-Fiander, University of Victoria, Canada) of the British-Academy/Leverhulme funded project ‘Women’s Early Modern Letters Online), Co-Director (with Svante Norrhem, Lund University) of the AHRC-funded network, ‘Gender, Politics and Materiality in Early Modern Europe’, and ‘Gendered Interpretations of the V&A and Vasa Museums’ and with Adam Smyth (Balliol College, Oxford) he edits the Ashgate book series ‘Material Readings in Early Modern Culture’. He is also co-Director (with the TV historian Dr Sam Willis) the Histories of the Unexpected brand of podcasts, books and live shows: www.historiesoftheunexpected.com, as well as co-Director of Cornerstone Heritage.