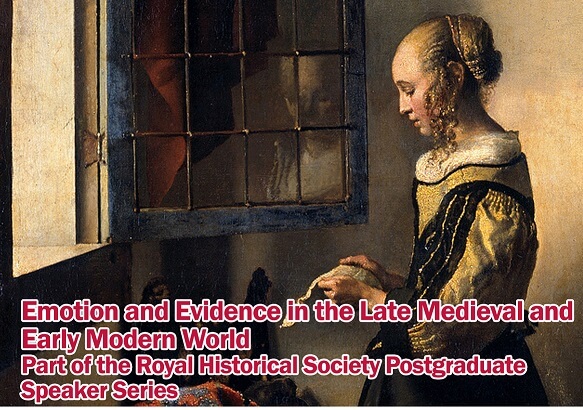 The history of emotion is a vital and growing field of research across a range of period and geographical areas. While the roots of the field extend back to the early 1990s, recent years have seen a flurry of postgraduate and post-doctoral research projects which foreground emotion in framing late-medieval and early modern understandings of a diversity of topics including law, gender, cultural exchange/transfer, language, books history, and notions of piety, to name a few. The proposed conference at Cardiff University will engage with this activity by inviting conversations between scholars whose research taps into and further develops these trends. Focusing on the question of finding, interpreting and debating evidence for the history of emotions within the relatively scarce source base of the late-medieval and early-modern periods, the conference will afford an exciting avenue through which to develop new approaches and facilitate further research across periods and sub-disciplines. This will encourage thinking of the history of emotions in novel, expansive ways by building upon diverse evidential foundations.

As part of the Royal Historical Society’s ‘Postgraduate Speaker Series’, this conference will prioritise placing early-career scholars in dialogue with each other and with established scholars within the field. Plenary papers will be given in the course of the day by two prominent historians of emotion, law and culture in the late-medieval and early-modern periods: Dr Garthine Walker (Cardiff University) and Professor Miri Rubin (QMUL). A planned round-table / group discussion at the close of the conference will put participants in dialogue with one-another while also providing a forum for discussion across career stages and points of reference. Participating speakers will be provided with opportunity to publish their findings in the university’s Cardiff Historical Papers series while also being considered for future contributions to well-established early-modern and medieval seminar series developed across Cardiff University and in collaboration with Swansea University. More broadly, the conference will afford participating scholars with the publicity, exposure and experiences vital to the development of an academic profile within an open and collegial environment focused upon ideas common to all historians of the late-medieval and early-modern period.