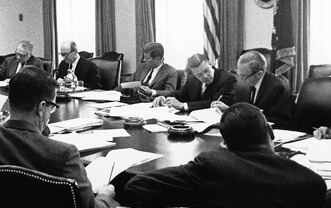 The Cuban Missile Crisis was a six-day clash in October 1962 between the United States and the Soviet Union over the presence of Soviet nuclear missiles in Cuba. Both John F. Kennedy and Nikita Khrushchev were determined to avoid nuclear war, but events could easily have spiralled out of control with cataclysmic results. Led by the author of a new book about the missile crisis (see https://edinburghuniversitypress.com/book-the-cuban-missile-crisis.html), the study day includes discussion of original source material, and an exploration of the British role. Was Britain just a bystander, or was it able to influence what went on through the ‘special relationship’ with Washington? Knowledge of the missile crisis is of continued relevance today when there is renewed debate about the value of nuclear weapons, and when the US government is re-establishing its relationship with Cuba after decades of hostility. Participants in the study day do not need to have prior knowledge of the missile crisis, but some background reading would be useful. Refreshments are available at the venue. The event is supported by the University of Central Lancashire and Edinburgh University Press.