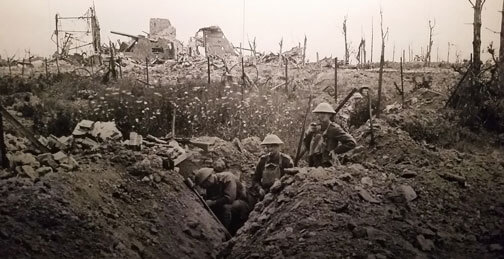 The Passchendaele campaign, fought in the Flanders mud, provides many of the most enduring images of the Western Front. It also remains one of the most controversial battles of the First Word War.Join us at this public conference where the continuing reinterpretation of the battle will be discussed as we approach the 100th anniversary of the ‘Battle of Mud’.

The academic controversies concerning the Passchendaele campaign have often reflected differing viewpoints on British identity and the extent to which the War exemplified British values. The conference will explore how the War impacted on Britain’s communities and the impact it has had on the evolution of a shared identity. It will examine the various ways in which Britain has marked the First World War centenary, examining the social, cultural and political influences that have shaped the commemorations.

As the Silk Mill Museum in Derby hosts the Weeping Window, from the installation ‘Blood Swept Lands and Seas of Red’ by Paul Cummins, this conference provides an opportunity to discuss what impact the centenary events have had on public knowledge and understanding of the Great War.

Further details and a booking form are available at the following web address: http://www.derby.ac.uk/FirstWorldWar