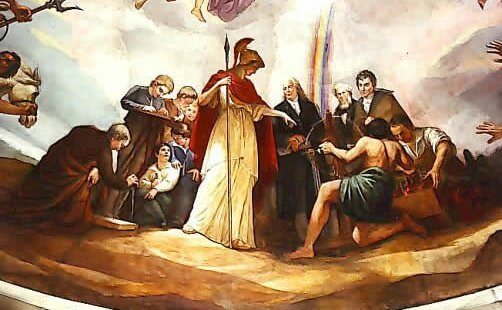 This colloquium will examine the creation and use of state or national personifications in the period from the 13th to the 18th century together with relating pictorial symbolism and gender-theory perspectives. Consideration will be given to both republics and monarchies, especially Venice, Genoa and the other Italian city states, the United Netherlands, the Swiss Confederation, Poland and Russia, the Holy Roman Empire and its various territorial states, France, the Iberian monarchy, England and the United Kingdom, Denmark and Sweden as well as the United States at the time of its emergence. This subject, which is multi- and interdisciplinary be definition, is aimed at historians and art historians as well as researchers from the fields of theology, political philosophy, law, classical studies and gender studies.

Early-stage researchers who are examining relevant issues in their masters’ thesis, dissertation or as post-docs are expressly invited to attend. The speakers’ travel and accommodation costs will be reimbursed.