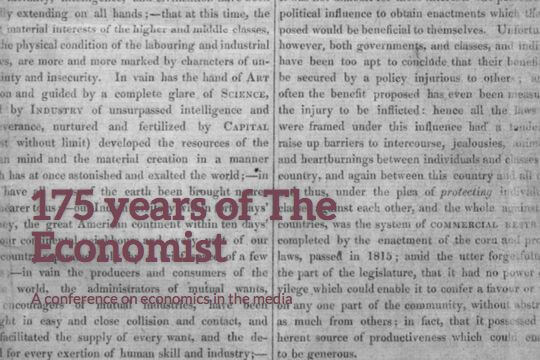 In 2018 the Economist magazine will be 175 years old. This conference is a prelude to a book that will examine the political, economic and cultural impact of one of the most significant news publications in the modern world.

The workshop will take place at University College London over 2 days: 24-25 September 2015. We seek to bring together journalists and researchers from many fields including economic, social and political historians, cultural analysts, sociologists, literary and media scholars.

Likely topics will include:

• Controversies: Corn laws, currency vs banking school, free trade, the people’s budget, the welfare state, nationalisations, the making and unmaking of Bretton Woods, the oil shocks, privatisations, the Great Depression, the Great Recession;
• Editors, Economists and intellectuals in The Economist: Walter Bagehot and others;
• Ownership, censorship and the law;
• Publishing history: journalists and their recruitment, women in The Economist, US and China editions, the Economist Intelligence Unit, digital expansion, statistics, rankings and methods, futurology;
• Management: industrial policy, labour relations, corporate strategy, personal finance, the global economy;
• Readers: the anti-corn law league, in academia, use by campaigners, correspondents and letter writers, in the City, use by lobbyists, and in international relations (WTO, IMF etc);
• Typography and design: covers, cartoonists, designers, printers and publishing and branding strategies;
• War: The First World War, The Second World War, the Cold War, and pan global conflicts