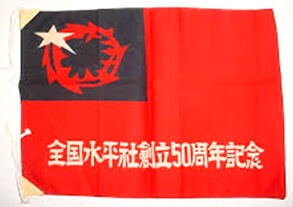 The presentation will trace the development of Buraku communities and policies towards them from the mid-nineteenth to the early twenty-first century. Following the formal abolition of senmin status in 1871, discrimination and prejudice was recreated across the second half of the nineteenth century such that it still remained a serious issue as reflected in Shimazaki Toson’s novel Hakai (Broken Commandment) published in 1909. Over the next three decades the Suiheisha and Yuwa movements competed for the support of Buraku communities until their rivalry was brought to an end with the outbreak of the Pacific war.

The new constitution adopted in 1946 committed Japan to a broad range of human rights protection but Burakumin benefitted little from the economic reforms of the occupation. The liberation movement reformed in 1946 and campaigned both about instances of discrimination and for the adoption of a national strategy to improve their living conditions. This resulted in the passage of the Special Measures Law in 1969 which lasted until 2002. Reforms have greatly improved the material circumstances in which they live but the movement has continued to demand legal protection against human rights infringements. Little progress was made until December 2016 when the Law to Prevent Buraku Discrimination was passed.

Ian Neary studied Japanese and Politics as an undergraduate student at Sheffield University, was a research student at Kyushu University and then wrote a doctorate on the Suiheisha at Sussex University. He taught at the universities of Huddersfield, Newcastle and Essex before moving to Oxford University in 2004 and has been a visiting professor at the universities of Kyushu, Saitama and Keio. He has produced books about the Suiheisha, industrial policy and the pharmaceutical industry of the UK and Japan (1995), Human Rights in Japan, South Korea and Taiwan (2002) and a text book on Japanese politics, The State and Politics in Modern Japan (2002, 2nd edition 2019). More recently, The Buraku Issue and Modern Japan – the career of Matsumoto Jiichiro was published in English in 2010 and in Japanese in 2016. His translation of A History of Buraku Communities in Japan by Teraki Nobuaki and Kurokawa Midori (入門被差別部落の歴史, 寺木信明 黒川みどり) was published in 2019 by Renaissance Books. He is currently working on an analysis of the formation and implementation of Dowa policy 1969-2002.