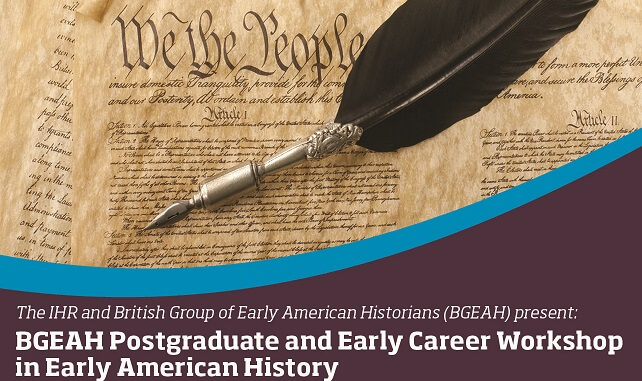 2016 marks the 20th anniversary of the founding of BGEAH, the British Group of Early American Historians.

The first BGEAH Postgraduate and Early Career Workshop is being held at the London-based Institute of Historical Research. London, with its unique colonial archival resources and lively research student populati­­on, is one of the leading centres of early American scholarship in Europe, and the IHR is a natural location for this event. The IHR Library recently opened its new North American Room, housing one of the foremost UK collections of published material relating to the early history of the United States, Caribbean, and Canada.

This day-long workshop for postgraduate researchers and early career academics working on any facet of American or Atlantic history from the seventeenth century through the early national period invites them to discuss their ideas among their peers and, where appropriate, to assess the current state of early American research in Britain.

Tea and lunch will be provided to all attendees.

To register for this event please visit the University of London Online Store.