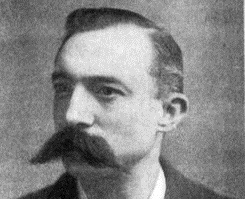 Allen Clarke (1863 -1935) was one of the North’s most popular dialect writers. He was at his peak between the mid-1890s and late 1920s, with thousands of devoted readers amongst the mill workers of Lancashire and Yorkshire. He was best known by his ‘Teddy Ashton’ pen-name which he used for his ‘Tum Fowt Sketches’ set in ‘Tum Fowt’ (or ‘Tonge Fold’) just outside Bolton.

Allen Clarke’s work had a radical political edge. He used comedy to attack the social evils of the time. He once wrote (of his alter ego!): “I daresay Teddy Ashton’s droll sketches have done more to help reforms than far more pretentious and direct articles. For ‘Teddy’ even in his comic dialect sketches, pokes sly fun and undermining sarcasm at the iniquities and social injustices of the day”. He wrote some serious works as well, including The Effects of the Factory System, a searing indictment of conditions in the Lancashire mills