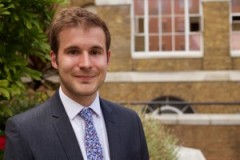 The article for which I was awarded this year’s Alexander Prize, forced me to reconsider a few things I had taken for granted as a historian of slavery and abolition. Now, during Black History Month, I’d like to discuss some of the challenges and opportunities facing historians interested in the study of black people in eighteenth- and early-nineteenth-century Britain.

October is Black History Month in the UK.  As historians working in this country, this is an opportunity for us to focus especially on aspects of our shared past which had for a long time been, systematically and quite purposefully, elided from our ‘national story’.

This includes Britain’s massive financial and ideological investment in slavery and the transatlantic slave trade—not an insignificant ‘small part of our long history’ as is often (I think cynically) claimed, but an almost 300-year-long cycle of brutal exploitation, racist subjugation, and state-sanctioned murder. It had direct and catastrophic demographic consequences for parts of Africa. It undergirded a system of global capitalism that was to contribute, very significantly, to Britain’s rise to leading world-power status during the eighteenth and early nineteenth centuries. The compensation monies paid out to slave-owners were reinvested into domestic infrastructure, linking slavery in a very tangible way to much-cherished episodes of the Whiggish ‘national story’, such as the expansion of the railways during the nineteenth century. As reparationists like Verene Shepherd argue, it also indirectly led to on-going ‘poverty, illiteracy and public health crises’ in the Caribbean. Many historians—including me—would suggest that slavery is a root cause for some of the grossest manifestations of global economic disparity and domestic social inequality visible in our communities today. 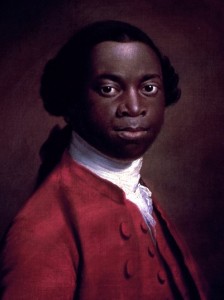 Yet, enormous though slavery is in the landscape of our shared history, it is not the whole story of how black and white people interacted during the same period. While historians like me, who are interested in recovering the experiences black people in Britain during the long eighteenth century, have to consider slavery and abolition at some point, we are also struck by how central a role black people played in a whole host of the other movements that (to borrow a cliché) ‘made Britain what it is today’. Nevertheless, it is telling that most of the ‘black heroes’ (in itself an unhelpful paradigm, as David Olusoga has recently pointed out) drawn from this period are primarily remembered through their crucial interventions in the abolitionist movements. For example, most of us will recognise the portrait that is often supposed to depict the famous black abolitionist Olaudah Equiano. 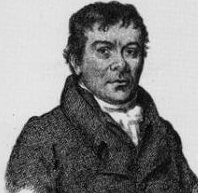 Fewer will know about Robert Wedderburn, the radical writer and orator who played a central part in the campaign for domestic political reform during the early nineteenth century. He was almost certainly involved in the ‘Cato Street conspiracy’ to murder Prime Minister Lord Liverpool and his cabinet in 1820, for which five men including William Davidson, Wedderburn’s friend and another ‘mulatto’ radical, were executed. Even those who do know about Wedderburn are still more likely to remember him for his antislavery writing than his radical activities. 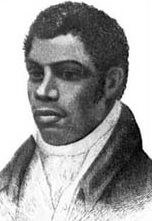 Black History Month prompts us to broaden our understanding of the contributions made by black people to British society, and thereby improve our understanding of British history more generally. For eighteenth-centuryists, this demands that we cast aside a couple of assumptions, namely:

1) That the only thing black people in eighteenth-century Britain were interested in was slavery.

2) That those black people who were interested in slavery all thought about it in exactly the same ways. 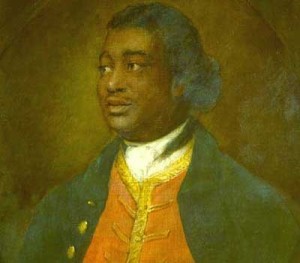 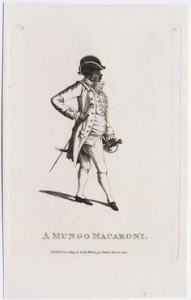 ‘A Mungo Macaroni’, believed to be based on Julius Soubise

The first of these assumptions is easy to challenge. The archives are full of counterexamples. As well as Wedderburn and Davidson, we might name Ignatius Sancho, valet to the Duke and Duchess of Montagu and later an independent shopkeeper, who was the first black person in Britain who we know to have voted in a parliamentary election. Sancho was a composer and music theorist, known to his (predominately white) friends as their ‘oracle’. His posthumously published Letters demonstrate his commitment as much to literary sensibility and polite sociability as to any single political issue. (He is, incidentally, the subject of a wonderful one-man show starring Paterson Joseph, which is currently touring the US.) We might think also of his young friend, the scandalous Julius Soubise, who, if reports are to be believed, was more interested in fine clothes, fine wine and sexual conquest than intervening in the issue of slavery. These are just two well-off and well-known examples; a great many more black people participated in British movements and societies without ever accruing such a degree of celebrity. Add to these the numerous black ministers and preachers who toured the country—men like Boston King and John Jea—and the picture we are left with is one of far greater intellectual and ideological heterogeneity than is often supposed.

Challenging the second assumption can take us into some more problematic, even disturbing territory. While abolitionists like Equiano and Ottobah Cugoano played a hugely important role in British social and political history, not all black intellectuals shared their views. Some of the most troubling of these relationships with slavery were mediated by religion. The Methodist minister and former slave John Jea, for example, preached passivity and forgiveness to the enslaved, assuring them that true (i.e. spiritual) emancipation would be waiting for them in the afterlife. My article on James Albert Ukawsaw Gronniosaw, the first black author to be published in Britain, suggests that his near-lifelong involvement with Calvinism, and in particular with slave-owning British Calvinists, may help to explain why his autobiography does not challenge, and at times appears to condone, enslavement as a means of Christianising Africans. (We should note, of course, that Gronniosaw’s text was recorded by an amanuensis [scribe] and therefore may not uncomplicatedly reflect his own private views, but given the circumstances surrounding its publication it is likely that he at least publically expressed the sentiments recorded in his autobiography.) In its support of proslavery religious thought Gronniosaw’s work echoed that of Jacobus Capitein, a black Dutch Reformed minister whose academic dissertation ‘examining the question: is slavery compatible with Christian freedom, or not?’ was published in Leiden in 1742.  Moreover, a number of the highest-profile African visitors to Britain during this period, such as Ayuba Suleiman Diallo and William Ansah Sessarakoo, were themselves slave traders. 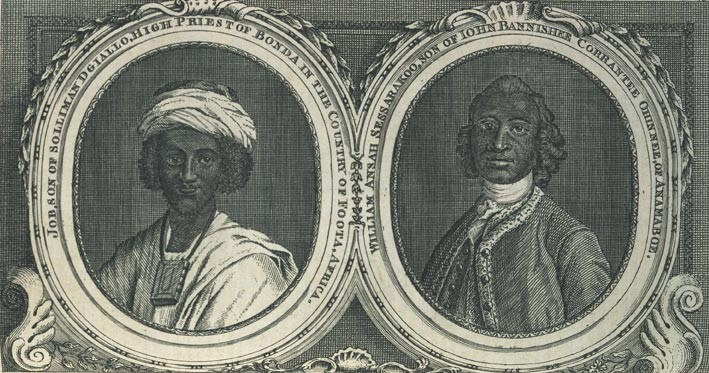 Of course, this does not mean that we cannot acknowledge and celebrate the achievements of black abolitionists, which, I reiterate, were of central importance to the British campaigns against slavery. Nor should it distract us from the fact that by far the majority of proslavery argument came from self-interested white slave owners, or indeed that Europe has benefitted from the transatlantic slave trade while sub-Saharan Africa and the Caribbean have suffered. But there is room to acknowledge that, contrary to what some commentators like Edward Long said about them at the time, black people in eighteenth-century Britain were human beings, and were thus subject to historical contingency, cultural bias and social influence. Like their white peers, some of them were wrong about slavery.

As historians we have an obligation to take seriously what these black intellectuals said, even when it is not what we were hoping to hear. But we should also note that, in a roundabout way, even these misguided figures ultimately helped improve the lives of free and enslaved people in Britain and its colonies. They proved to a sceptical British public that black people were capable of intellectual, spiritual and moral understanding at the highest level, and in doing so debunked one of the fundamental myths used to justify slavery. While acknowledging the complexities that surround the formation and dissemination of some of these ideas, we should celebrate these hard-won achievements as fundamental to the development of our shared history—or, if you prefer, our ‘national story’.