The Gaiety Girl and the Matinee Idol

Constructing Celebrity and Sexuality in the West End of London, 1880-1914

The Royal Historical Society’s 2022 Prothero Lecture will be given by Professor Rohan McWilliam at the Gustave Tuck Lecture Theatre, University College London. Booking for the lecture is available here.

In ‘The Gaiety Girl and the Matinee Idol’ Professor McWilliam argues that in the later Victorian period the West End of London embodied the shock of the new. It became the world’s leading pleasure district and reshaped British culture in distinctive ways.

Between 1880 and 1914, the West End helped in particular to invent modern ideas not only of sexuality and stardom but glamour itself. New forms such as musical comedy at the Gaiety Theatre on the Strand and Daly’s on Leicester Square constructed images of what was fashionable and up-to-date.

The lecture ranges from music halls and theatres to different kinds of mass culture, including the poster and the picture postcard. 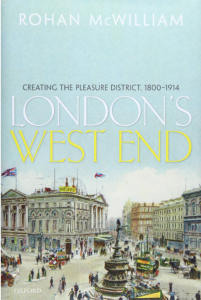 Rohan McWilliam is Professor of Modern British History at Anglia Ruskin University, Cambridge, and a formerPresident of the British Association for Victorian Studies.

He is at work on a history of the West End of London, the first volume of which was published in 2020: London’s West End: Creating the Pleasure District, 1800-1914 (Oxford University Press.

The Lecture will be followed by the Society’s Summer Party, held in the North Cloisters, University College London, from 6.30pm. We look forward very much to welcoming RHS Fellows, members and all attendees of the lecture.

First delivered in 1969, the Lecture is named for the historian and editor Sir George W. Prothero (1848-1922), Professor of History at the University of Edinburgh and RHS President, 1901-1905. This year’s lecture is given in the same week as the centenary of Prothero’s death (on 10 July 1922).