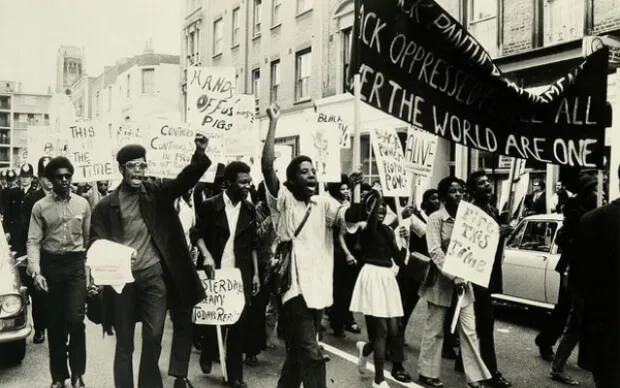 Protesters against police brutality and racism at the centre of the Mangrove Nine trial, 1970. The National Archives, Catalogue reference: MEPO31/21 (3)

Inequality remains a major challenge for historians in UK higher education. Historians of colour are severely underrepresented at all academic levels, while curriculums and research – and the libraries and archives that support them – often fail to reflect the rich histories of racial and ethnic minority groups.

In 2018 the Society published a major survey, Race, Ethnicity & Equality in UK History: A Report and Resource for Change, which evidenced the scale of under-representation, the extent of workplace racism, and the limitations of History curricula.

The Society continues to address matters of under-representation and racism by disseminating and discussing its research to historians, and through its own activities as a learned society. Since 2019, this work has been strengthened by the appointment of two Past & Present Fellows: Race, Ethnicity & Equality in History — Dr Shahmima Akhtar (2019-20) and Dr Diya Gupta (2020-).

Between 2017 and 2022, the Society was assisted in this work by its Race, Ethnicity and Equality (REE) Working Group whose members were central to the research and writing of the 2018 Race Report and its subsequent promotion and interpretation.

The Working Group was chaired by Dr Sadiah Qureshi (University of Birmingham) and Dr Jonathan Saha (Durham University) and closely supported by the RHS Past & Present Fellows: Race, Ethnicity & Equality (2019-22).