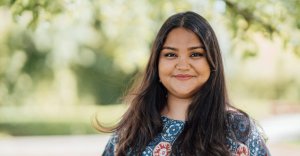 Urvi Khaitan is an RHS Marshall Fellow, 2022-23, held jointly with the Institute of Historical Research, University of London. Urvi’s six-month Fellowship runs from October 2022 to March 2023.

Urvi’s Oxford University thesis — ‘Women and Work in the Indian Economy: Empire, Famine, and Labour during the Second World War’ — explores how women at the margins of colonial Indian society engaged with and experienced paid work. She investigates the ways in which lower-caste and Adivasi (indigenous) women in late colonial India negotiated a turbulent wartime economy in the eastern provinces of Bengal, Bihar, and Assam during the Second World War.

Constituting the bulk of the subcontinent’s female population — but peripheralized historically and historiographically not only by their gender but also by their caste, class, and location — non-elite women bore the brunt of economic shocks brought about by the war and the 1943 Bengal Famine. Economic displacement exacerbated precarity and intensified the intimate relationship between questions of work and questions of survival.