Home > About Us > Richard Fisher 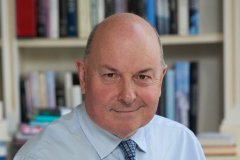 Richard Fisher read history at Balliol College, Oxford and has worked in the university press sector for the past thirty-five years. Formerly Managing Director of Academic Publishing at Cambridge University Press, he is currently Vice-Chair of Yale University Press and a non-executive director of Edinburgh University Press. He is an Associate Editor of the Oxford Dictionary of National Biography, responsible for sportsmen and sportswomen, and serves as the Academic and Policy Correspondent of the Independent Publishers Guild: he has also served on numerous sub-committees of the British Academy, the AHRC and HEFCE concerned with scholarly communication. His own publications range widely, and he claims to be the only person alive to have been published in History of European Ideas, the New Musical Express, and the Newsletter of the Welsh Golfing Union. He has served a previous term (2007-2010) as Vice-President of the Society and Chair of its Publications Committee.