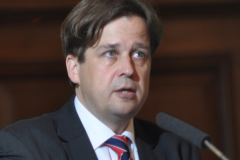 Thomas Otte is Professor of Diplomatic History, University of East Anglia where he teaches the history of modern war and conflict, military intervention and diplomacy, and British and European history of the 19th century.

Thomas is the author or editor of some eighteen books, among them July Crisis: How the World Descended into War, Summer 1914 (CUP, 2014), and, most recently, Statesman of Europe: A Life of Sir Edward Grey (Allen Lane, 2020). Thomas been an adviser to the Foreign and Commonwealth Office (FCO) and, in addition to his Royal Historical Society work, is a trustee of the Foreign Office Historical Collection, and member of the national executive committee of the British International History Group (BIHG).