Home > About Us > Past Presidents > Professor Margot Finn 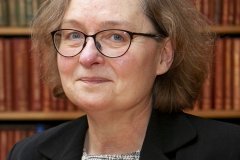 Margot Finn is President of the Royal Historical Society and Chair in Modern British History at University College London. She is an historian of Britain and the British colonial world in the ‘very long 19th century’, c. 1750-1914. Margot was recently Principal Investigator on the major Leverhulme Trust-funded project ‘East India Company at Home, 1757-1857’, and is a former Vice-President of the RHS. She is also a Trustee of the Victoria and Albert Museum, and was a REF History Sub-panel member. Her publications include After Chartism: Class and Nation in English Radical Politics 1848-1874 (Cambridge, 2003), and The Character of Credit: Personal Debt in English Culture, 1740-1914 (Cambridge, 2003).