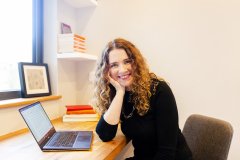 Emma Griffin is Professor of Modern British History at the University of East Anglia, and researches on the social and economic history of Britain during the period 1700-1870, with a particular interest in gender history, the industrial revolution, and working-class life. Emma’s most recent publications include Liberty’s Dawn. A People’s History of the Industrial Revolution (2013) and Bread Winner. An Intimate History of the Victorian Economy (2020), both published by Yale. She is also a former editor of History (the academic journal of the Historical Association) and of the Historical Journal.

Emma is a frequent contributor to radio and television, having written and presented several Radio 4 documentaries on diverse aspects of her research, from the history of fox-hunting, to the industrial revolution, to the gender pay gap and its history. She was a historical advisor for the Channel 4 drama, The Mill and co-presented The Real Mill with Tony Robinson on More4, and has appeared as an expert contributor on several radio and television programmes, including BBC1’s Who do you Think You Are? and Radio 4’s In Our Time.

Emma became the 35th President of the RHS in November 2020. Read more from Emma on Historical Transactions, the RHS blog.