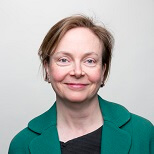 Professor Caitríona Beaumont is Professor of Social History at London South Bank University and Director of Research for the School of Law and Social Sciences.  Her research focuses on the history of female activism and women’s movements in nineteenth and twentieth century Britain and Ireland. Her book, Housewives and Citizens: Domesticity and the Women’s Movement in England, 1918-64 was published in 2013 by Manchester University Press.

Recent journal articles and chapters feature research relating to gender and the interwar peace movement, the print culture of the Women’s Institutes and the Mothers’ Union and the application of social movement theory to the Irish suffrage and women’s movement. She is currently working on a history of intergenerational female activism in Britain, 1960-1980. She has also contributed web content to The British Library and 1914-1918 Online: International Encyclopedia of the First World War.