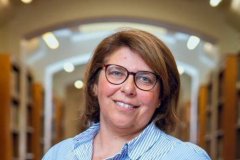 Barbara Bombi is Professor of Medieval History at the University of Kent. Her research interests cover ecclesiastical and religious history in the High Middle Ages (1200-1450).

Barbara specialises in the medieval papacy and canon law, the Crusades of the early 13th century, and the history of the Military Orders. Her most recent monograph is Anglo-Papal Relations in the Early Fourteenth Century: A Study in Medieval Diplomacy (2019), published by Oxford University Press. Barbara was elected a Fellow of the British Academy in 2022.