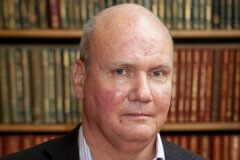 Andrew Spicer is Professor of Early Modern European History at Oxford Brookes University. He completed his doctorate at the University of Southampton on exiles from France and the Southern Netherlands in the late sixteenth century. As one of two Literary Directors, Andrew oversees RHS publications and is the editor of the Society’s journal, Transactions of the Royal Historical Society.

Andrew has published widely on early modern immigrant communities, as well as nineteenth-century interest in the Huguenots. His more recent work has focused on the socio-cultural impact of the Reformation, particularly sacred space, art & architecture, and the material culture & setting of worship. He is an editor of the Ecclesiastical History Society’s Studies in Church History series. Besides Calvinist Churches in Early Modern Europe (Manchester, 2007), he has published a number of edited volumes, most recently Parish Churches in the Early Modern World (Farnham, 2016). He is currently completing a monograph entitled Conflict and the Religious Landscape: Cambrai and the Southern Netherlands, c. 1566–1621 to be published by Brill.