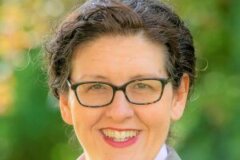 Dr Helen Paul is a Lecturer in Economics and Economic History at the University of Southampton. A historian of the late-seventeenth and eighteenth century, her work focuses primarily on the South Sea Company and enslavement.

Helen’s publications include The South Sea Bubble: an Economic History of its Origins and Consequences (2011) and she is a frequent contributor on programmes such as Radio 4’s In Our Time.

Helen was elected a Councillor of the Royal Historical Society in September 2022. She was previously, for six years, Honorary Secretary of the Economic History Society (EHS) and has also served as chair of the EHS Women’s Committee.