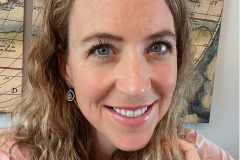 Emilie Murphy is Lecturer in Early Modern History at the University of York. She is a specialist of the cultural and religious history of England, and English-speaking people abroad, 1500-1700. Her scholarship focuses on sound and hearing, voice and language, and various aspects of performance culture. She is co-editor of Sensing the Sacred in Medieval and Early Modern Culture, and her essays have appeared in several major journals including Renaissance Quarterly, The Historical Journal and Renaissance Studies. Her current research project is The Reformation of the Soundscape in Early Modern England and she is a lead investigator on the AHRC funded research network, ‘Soundscapes in the Early Modern World’.

Emilie enjoys sharing her research with a public audience, and has appeared as an expert contributor radio and television programmes including BBC 1’s Countryfile, and BBC Radio 4’s Making History.