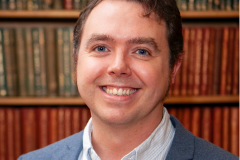 Andrew W.M. Smith is Director of Liberal Arts at Queen Mary University of London. His work focuses principally on the French and Francophone world with an interest in identities beyond the frame of the nation state. Recent articles have addressed minority nationalism, decolonization, the Second World War, and linguistic politics.

Andrew is the author of Terror and Terroir: The Winegrowers of the Languedoc and Modern France (Manchester University Press, September 2016), and editor (with Chris Jeppesen) of Britain, France and the Decolonization of Africa: Future Imperfect? (UCL Press, March 2017). Andrew was previously the Society’s Honorary Director of Communications, and took on the role of Honorary Secretary in 2021.