The latest volume in the Royal Historical Society’s Camden Series is published this week.

British Financial Diplomacy with North America, 1944-1946. The Diary of Frederic Harmer and the Washington Reports of Robert Brand, edited by Michael F. Hopkins, recalls Britain’s urgent need for financial support from its allies at the close of the Second World War. Though victorious, Britain was also economically exhausted, and reliant its North American partners for aid. 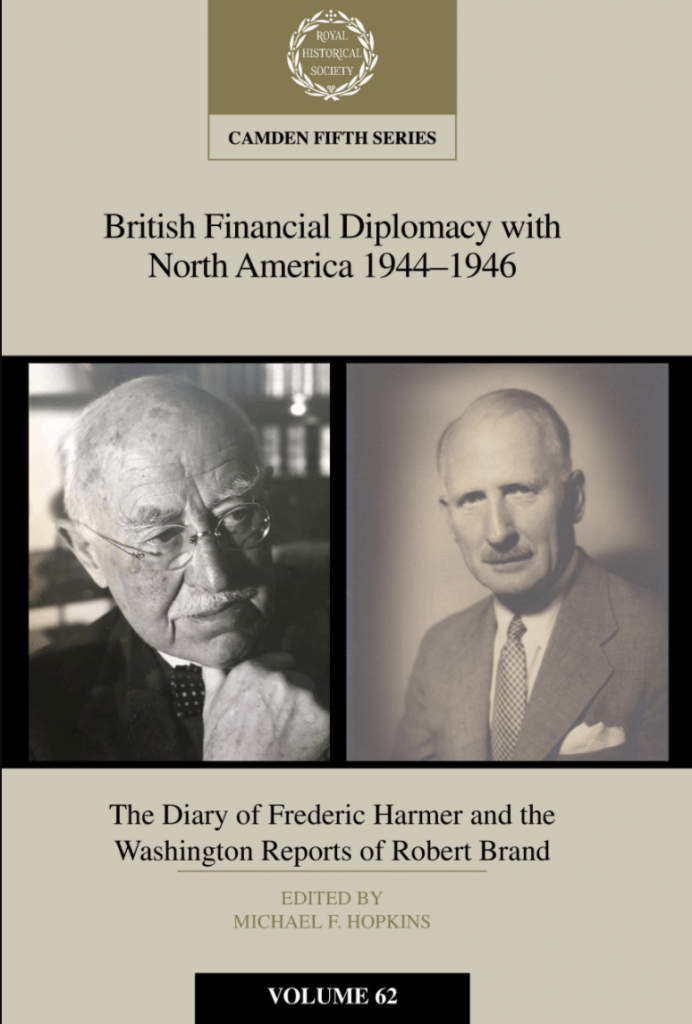 British Financial Diplomacy with North America, 1944-1946 examines the strains of the final year of war and the efforts of key British figures to ameliorate the problems through diplomacy with the United States but also with Canada, whose vital assistance in war and peace is often forgotten. It contains the diary of Frederic Harmer, who served as a wartime temporary official in the Treasury and then as special aid to John Maynard Keynes, the British government’s chief economic advisor. The second part of the volume provides a series of reports by Robert Brand, who was head of the British Food Mission and then chief Treasury Representative in Washington.

Both works have been edited, with a scholarly commentary by Dr Michael F. Hopkins, a specialist in post-war American history and Anglo-American diplomacy, from the University of Liverpool. Dr Hopkin’s Introduction to the new Camden volume is freely available via the Cambridge University Press website, alongside the full text.

Frederic Harmer’s Diary provides a dimension to the intense period of talks in late 1945 not captured in the official records. Its value rests not just on the way it reveals the rhythms, key issues and, above all, the atmosphere of the talks on the financial issues between the British and the Americans.

Robert Brand’s Washington Reports capture his analysis of the thinking in the United States, the debates among officials and the evolving British financial approach in 1944-6. His commentaries concern not just the financial issues, with perceptive things to say about the broader Anglo-American relationship and how US opinion viewed Britain.

Taken together, Harmer’s Diary and Brand’s Reports bring vividly to life the crucial debates about Britain’s economic future in the wake of the greatest war in history.

The RHS Camden Series is the Society’s primary source publishing collection. The Series makes available important and unpublished texts for historians, with expert commentary. The RHS publishes two volumes of primary sources each year and many of the early volumes remain in regular use for historical research.

The Camden Series is currently published by Cambridge University Press and now comprises over 325 volumes. More on the RHS Camden Series.