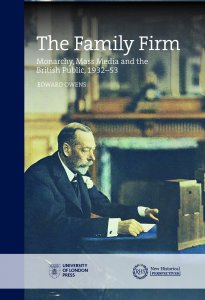 The RHS is delighted to announce that today marks the release of the first volume in New Historical Perspectives, an Open Access books series for early career scholars commissioned by the Royal Historical Society and published as an imprint of the Institute of Historical Research by University of London Press.

The first book in the series is Ed Owens’ The Family Firm: Monarchy, Mass Media and the British Public, 1932-53.

The Family Firm presents the first major historical analysis of the transformation of the royal household’s public relations strategy in the period 1932-1953. Beginning with King George V’s first Christmas broadcast, Buckingham Palace worked with the Church of England and the media to initiate a new phase in the House of Windsor’s approach to publicity. The book also focuses on audience reception by exploring how British readers, listeners, and viewers made sense of royalty’s new media image. It argues that the monarchy’s deliberate elevation of a more informal and vulnerable family-centred image strengthened the emotional connections that members of the public forged with the royals, and that the tightening of these bonds had a unifying effect on national life in the unstable years during and either side of the Second World War. Crucially, The Family Firm also contends that the royal household’s media strategy after 1936 helped to restore public confidence in a Crown that was severely shaken by the abdication of King Edward VIII.

Download and buy copies of The Family Firm here.

All titles in New Historical Perspectives are published in print (hard- and paperback) and as Open Access (OA) from first publication, with no fees charged to the author or the author’s institution. Monograph authors receive a workshop with invited specialists to discuss their work before its final submission, and guidance from members of the NHP’s academic editorial board who also oversee a careful peer-review process.

Find out more about the New Historical Perspectives book series, including how to make a proposal, here.