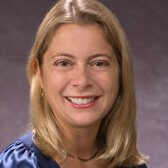 Dr Laura Beers looks at 2015 general election predictions and how they align with past efforts of pollsters, pundits and punters to predict general election results. Laura Beers is a Birmingham Fellow at the University of Birmingham.  She is the author of Your Britain: Media and the Making of the Labour Party (Harvard University Press, 2010), and has published extensively on politics and public opinion in twentieth-century Britain.

Which party should Britons expect to come out of the 7 May election with the largest number of seats, and, therefore, arguably, a mandate for first stab at forming a government?  Conventional wisdom suggests that, the national polls being a dead heat, the Labour party should fare better in terms of seats on 7 May than the Conservatives.  Since Labour’s emergence as a national political player in 1918, the party has secured its seats with comparative efficiency – it has held seats in smaller constituencies, won on lower turnout and beaten its rivals by smaller margins in tight contests.  So, if both Labour and the Tories win 35% of the vote, Labour should be expected to spread their vote share more economically and translate an equal number of votes into a larger number of seats.  However, the conventional wisdom may not hold to the same extent (if at all) this election, as the SNP wipe out Labour’s hold over small traditionally low-turnout seats in Scotland, and UKIP cuts down on some of the Tories’ “wasteful” mega-majorities without actually costing them seats.

Pollsters, pundits and punters now all suggest it is unlikely any party will achieve an outright majority on 7 May.  But who will walk away with a plurality of seats?  It depends on whom you ask.  The various models based on current poll data and analyses of past performance are divided over which party will come out ahead.  On 17 April Polling Observatory predicted Labour to win 278, with the Tories only garnering 269, and, on 21 April, May2015.com predicted a tiny Labour plurality of 273 with the Tories winning 271.  In contrast, this week the Guardian gave the Tories a one-seat advantage, predicting 271-270, while Election Forecast plumped for a Tory plurality of 283 to 270 for Labour, and Elections Etc gave the Tories a whopping 25 seats over Labour, predicting 288 to 263.  Ask the academics and pundits, and it appears opinion is divided.

Ask the pollsters for their predictions, and you get a similarly mixed picture. Three weeks ahead of the election, the Independent asked the heads of several polling agencies to predict the outcome.  Most demurred, but of those who would hazard a wager, Damian Lyons Lowe of Survation gave Labour a plurality, while Rick Nye of Populus and Nick Moon of GfK plumped for the Tories to win the most votes. 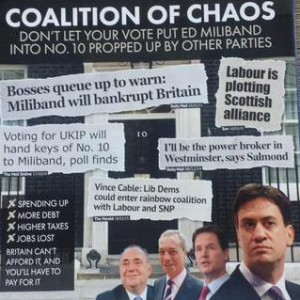 If, however, we turn to the betting markets, the picture becomes much more uniform.  The website OddsChecker reports the current odds for 23 separate betting markets, and the predicted majorities prices in 21 markets.  While the odds vary slightly by betting shop, with Corals currently selling Labour seats at 267.5, while William Hill is selling them at 272.5, every single one of these markets is predicting a Conservative plurality with the Tories outperforming Labour by more than 10 seats.  This is not a sudden swing.  The betting markets have had odds on a Conservative plurality for weeks. So, should we believe the gamblers over the pollsters?  Considering the historical evidence, the answer is, maybe. 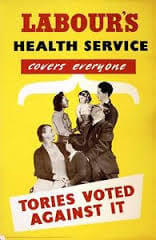 Certain economists and political scientists have recently expressed considerable enthusiasm for political betting markets as accurate bellwethers.  According to Professor Leighton Vaughan Williams, director of the Political Forecasting Unit at Nottingham Business School, “The hypothesis here is that the collective wisdom of many people is greater than the conclusions of a few. Those myriad people feed in the best information and analysis they can because their own financial rewards depend directly upon this. And it really is a case of “follow the money” because those who know the most, and are best able to process the available information, tend to bet the most.”

When betting markets have proved more accurate than pollsters, as during the Scottish referendum campaign or at the 2005 general election, supporters have been quick to attribute their predictive success to the so-called “wisdom of the crowds.”  When, in contrast, markets have been much wider of the mark, there has been little effort to analyze the reasons for their collective failure.  On the morning of the 2010 general election, for example, the betting markets were selling Labour seats at between 216.5 and 220.5.  The actual Labour take was 257.  (While few analyses based on polling results were on target, most came closer to the actual result than the betting markets.)  This morning (23 April), Mike Smithson, the editor of the influential PoliticalBetting.com, reprinted the 2010 betting spreads over the tag line: “Betting prices are NOT a good indicator of political outcomes.” 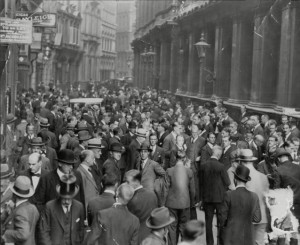 Proponents of the predictive power of election markets rely on the assumption that the ‘crowd’ of men and women who bet on politics is sufficiently diverse, independent and decentralized that the aggregate information which it brings to the market offers a representative picture of the national mood.  In point of fact, we have little accurate information about who bets on modern elections.  We can, however, sketch a fairly clear picture of the group that bet on general elections in the decades between the two world wars.  The interwar political betting markets were based, not out of high street betting shops, but out of the London Stock Exchange, the Baltic and Liverpool exchanges.  There is evidence that brokers bought and sold Majorities contracts on behalf of investors around the country, and that some City clerks wagered on the market on a small scale, but the bulk of participants were almost certainly either brokers themselves, or businessmen in the south of England with some connection to the City. These men were thus an exceptionally non-diverse group. They were also not particularly independent or decentralized. The majority of traders worked in the City, and lived within commuting distance of London. While a few brokers may have been Liberals, particularly before 1931, the vast majority were Conservatives. Hardly a man in the City supported the Labour party. Nearly all got their information from the pages of The Times, the Telegraph, or other Conservative papers. Most belonged to the same set of clubs.  The vast majority were also, unsurprisingly, not very good at predicting general election outcomes. 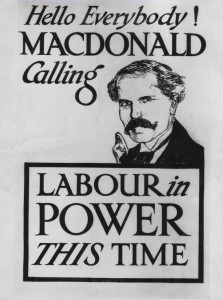 Before the December 1923 election, for example, the betting markets were trading Conservative majorities at around 30 seats.  The actual result was a hung parliament with an effective Conservative minority of 99.  During the October 1924 campaign, Labour seats traded at around 185, even after the publication of the “Zinoviev letter”.  Labour ultimately returned 151 MPs.  And in 1929, the election which most closely resembles today’s uncertain contest, Labour seats closed at 245 on the eve of the election, with Conservatives trading around 270.  However, it was the Labour party that came away with a plurality of seats, and the mandate to form the next parliament. Most spectacularly, in 1931, the punters failed to foresee the anti-Labour landslide, and government majorities traded below 200 for most of the campaign.  In the end, the various pro-government parties returned a majority of nearly 500 seats.  The Financial Times was unsurprised by the failure of the betting markets to predict the outcome.  As the paper wrote on 10 October 1931: “The Stock Exchange, naturally, hopes that a big National Government majority will be obtained. It realizes, however, that it is too far away from some of the big centres of population in the north, and northeast, etc, to be a very good observation post of public opinion.” 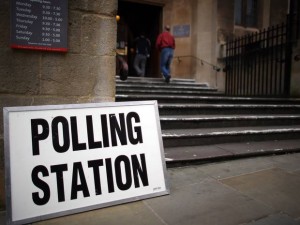 There is little reason to suspect that the anonymous participants in the current political betting markets are as out of touch with public opinion as the representatives of the metropolitan elite who dominated the interwar markets.  However, their failure accurately to predict the 2010 election result throws doubt on the assertions of those who claim that markets are a better indicator of political trends than analyses of opinion polling.  If history has shown us anything, it is that the composition of political betting markets matters.  Given the dearth of information about today’s political punters, we’ll have to wait until 7 May to find out whether or not the confident crowd betting on a Conservative plurality truly possesses more wisdom than the equivocating pollsters and academics.

Laura Beers “Punting on the Thames: Electoral Betting in Interwar Britain,” Journal of Contemporary History 45, no. 2 (2010)

See Laura Beers ‘GE2015 Pollsters, Pundits & Punters: a view from the morning after’.