Following the opening of London’s first major memorial to the Korean War in December 2014, Dr Grace Huxford (Warwick) reflects on why this conflict is sometimes described as a ‘forgotten war’. Grace is a historian of Cold War Britain and has recently completed her PhD on the life-writing of British servicemen in the Korean War. She is currently Research Fellow in Oral History at the University of Warwick.

At the end of 2014, the North Korean response to the film The Interview received a great deal of coverage in the US and British press. Accusations that the Communist state had externally hacked the electronic systems of Sony (the production company behind the film) caused many commentators to analyse the leadership cult and bellicose outlook of North Korea once again. 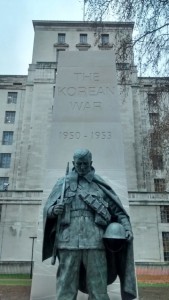 As policymakers discussed appropriate responses and the increase of sanctions against the  North Korean state, a tangible reminder of the impact of conflict on the peninsula was revealed in London. On 3rd December, a £1m memorial to 1,106 British servicemen who died during the Korean War (1950-1953) was unveiled on Victoria Embankment, outside the Ministry of Defence. Britain, who offered the second largest contribution of troops to the UN force in June 1950, was one of the last of the twenty-seven nations involved to open a national memorial to its Korean War dead. The war has become largely ‘forgotten’ in Britain today, despite the ongoing attention paid to the Communist state of North Korea.

The Korean War was an important moment in the post-1945 world: it was the first ‘hot’ war of the Cold War and the first police action of the new United Nations (UN). The war was also significant for Britain: increased armament spending challenged the welfare agenda of the post-war Labour government, threatening party unity; the war exhibited the weaknesses of Britain’s international position in the early Cold War; and  it saw the involvement of almost 100,000 British and Commonwealth troops in the early 1950s, many of them national service conscripts. So why has the history of the Korean War remained largely hidden?

As veterans of the Korean War have noted, few people in Britain in 1950 could find Korea on a map. Although this is perhaps an exaggeration, that summer the BBC hastily put together programmes on the Korean peninsula, explaining its location, its culture and the significance of the invasion of the Republic of Korea (ROK) in the south by the Democratic People’s Republic of Korea (DPRK) on 25 June 1950. Many British servicemen sent to support the US-led UN force were similarly confused by the aims of fighting in this distant country, writing home that they were uncertain of the ‘object’ of the war. Although Korea captivated the press during the early months of the war, attention dwindled as the war rumbled on, with no decisive outcome: historian David Kynaston has even shown how some contemporaries felt that the birth of Princess Anne in August 1950 received more popular interest than the war.

The unclear ending of the war in 1953 did little to clarify matters. As US historian Charles Young has argued, the ambiguous ending of the Korean War, following a year of indeterminable negotiations, meant that the US and its allies could not claim outright victory in the war or herald their achievements back at home. The animosity between North and South Korea today continues to make the ending of the war seem only provisional, as North Korea has threatened to cease to abide by armistice six times since the early 1990s.

However, undoubtedly one of the most significant reasons for the obscurity of the Korean War within the British national imagination is its proximity to the Second World War. Coming only five years after this global, far-reaching conflict, the Korean War was by comparison far less significant to the lives of everyday British people. Furthermore, unlike the Second World War, it served no purpose to subsequent governments. The ‘People’s War’ of 1939-1945 has been repeatedly used by politicians to stand for a whole host of ‘national values’, from stoicism to a sense of duty. In the early 1980s for instance, Margaret Thatcher’s government, with its revived sense of patriotism, used Churchillian language to inspire a sense of national identity (prompting History Workshop Journal‘s landmark study of patriotism in 1984). Even in the 1950s, the Second World War was starting to dominate national culture and identity, meaning that the Korean War was ‘forgotten’ almost as soon as it began. Neither praised as a worthy conflict (like the Second World War) or vilified as a waste of life (like the First World War or, in the US, Vietnam), the Korean War has not served a wider narrative about war and peace in the twentieth century. Because of this it remains largely hidden in national memory. 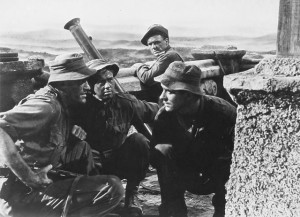 There are a few exceptions to this. Although servicemen lament the lack of novels and films  about the Korean War, famous television series such as M*A*S*H* remain popular with British audiences. The only film made specifically about British experiences in the Korean War is ‘A Hill in Korea‘ (1956) (renamed ‘Hell in Korea’ for its US release), starring a young Michael Caine, fresh out of national service and returned from Korea himself. Both the film and the novel on which it is based reflect on the harshness of the climate and the apparent futility of conflict. References to the Korean War within British television are fleeting. Perhaps the most famous Korean War veteran on British television was the eccentric hotelier Basil Fawlty, star of the 1970s comedy Fawlty Towers. However, Basil’s experiences are conclusively dismissed: in one episode he whispers to his wife Sybil, ‘I fought in the Korean War you know, I killed four men’. Sybil simply says to two passing guests: ‘He was in the Catering Corps – he used to poison them.’

Is Korea’s ‘forgotten’ status likely to change in future? It is hard to say. On 11 November 2013, Korean War veterans took a high profile role in Armistice Day commemorations in Whitehall. Prompted by the 60th anniversary of the ceasefire, veterans were invited to join the march past at the Cenotaph, the commemorative centre of ‘Remembrance Day’ events. However, the main British veterans association – the British Korea Veterans Association (BKVA) – has recently discussed disbanding following the completion of the memorial in London, based on the wish to ‘ go out with our heads held high rather than just fade away’. Whatever the outcome will be, the opening of the new memorial goes some way in acknowledging the significance of this ‘hidden’ conflict within British political and social history.

Return to History in the News page