Home > Events > Voting Reform 150 Years on from the 1872 Ballot Act: A Symposium at the IHR in honour of Valerie Cromwell 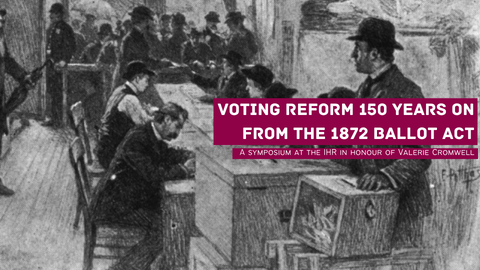 2022 marks the 150th anniversary of the passing of the 1872 Ballot Act which introduced the requirement for a secret ballot in British parliamentary and local elections. Our symposium will take this as the starting point for a broader examination of the history of voting reform. It will consider the culture and conduct of Victorian elections and the circumstances that led to the passing of the Act; it will deal with the debates around the secret ballot, the impact of the Act at home (especially in Ireland), its influence abroad, and the subsequent history of electoral administration, relating some of these issues to currently debated questions of electoral fraud and voter identity.

The symposium seeks to bring together historians, political scientists and representatives from organisations such as the Electoral Commission and the UK Boundary Commissions. It is being held in honour of Valerie Cromwell who was Reader in History at the University of Sussex and Director of the History of Parliament Trust between 1991 and 2001. It is being jointly organised by History & Policy at the IHR and the History of Parliament, and has been made possible thanks to a generous donation by Lady Valerie’s husband, Sir John Kingman.